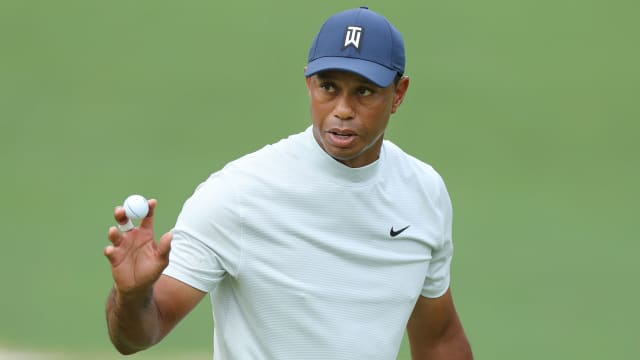 Tiger Woods was the centre of attention at Augusta National as the final groups prepared to begin their third rounds in the Masters.

For the first time in Masters history, five players were tied for the lead through 36 holes - all of them major champions in Brooks Koepka, Louis Oosthuizen, Jason Day, Francesco Molinari and Adam Scott.

A thrilling day was in prospect, with Woods one of four men a solitary shot off the pace at six under.

Woods has 14 majors to his name, but the last of those was secured almost 11 years ago at the U.S. Open, while he has not triumphed at Augusta since 2005.

Yet his performance so far this week has raised expectations of a drought-breaking triumph. Had he been more clinical with the putter from inside 10 feet, he could easily have been clear of the field at the end of round two.

Woods was due to begin his third round alongside Ian Poulter at 2:05pm local time (7:05pm BST), with Day and Molinari making up the final pairing 40 minutes later.

Oosthuizen was paired with world number two Dustin Johnson, another major champion firmly in contention, while Scott and Koepka were together in the penultimate group.

Leaders tee off in just over two hours …

Plenty of birdies were anticipated on Saturday and Patrick Cantlay - one of the morning starters - was showing what was possible, playing his first 11 holes in five under to move within four of the lead.

However, Rory McIlroy's slim hopes of completing a career Grand Slam this week looked to be over. Having started the day seven off the pace, he was two over on the front nine.