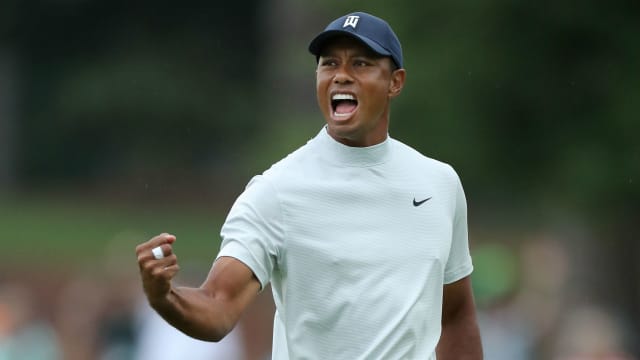 Tiger Woods moved ominously into contention for another Masters title on Friday, rising to within one shot of the halfway lead at Augusta National after he was almost knocked off his feet by a sliding security guard in a hugely dramatic second round.

Francesco Molinari, Jason Day, Brooks Koepka, Adam Scott and Louis Oosthuizen all reached the clubhouse on seven under, setting a record for the most players to be tied at the top of a Masters leaderboard after 36 holes.

Yet Woods provided the day's biggest talking point, as he surged into contention having survived a dramatic scare on the 14th hole when a security guard – running in a bid to control spectators – slipped and almost knocked golf's biggest star off his feet.

Woods had played a sublime recovery shot from the pine straw immediately prior to that incident and duly converted his resulting birdie putt before picking up another shot at the 15th to get to six under.

This is the first time in the history of #TheMasters we've had a five-way tie for the lead after 36 holes. pic.twitter.com/QiOwiE8LHX

Fantastic approaches to the 17th and 18th went unrewarded, with Woods again struggling to convert a number of chances from inside 10 feet, but he could still be satisfied with a second-round 68 that leaves him firmly in the hunt for a fifth green jacket and 15th major title.

The omens do appear to be mounting up regarding another triumph for Woods, who is this week wearing mock turtlenecks matching the style of shirts he wore when he last triumphed at Augusta in 2005. For the first time since that tournament, there was a Friday suspension at Augusta due to inclement weather, with the threat of lightning forcing a brief stoppage.

However, the five men sharing the lead have all claimed major titles and will each be confident in their ability to deny Woods his first such success since the 2008 U.S. Open.

Oosthuizen posted the second-lowest number in round two - his 66 improving on the scores of Molinari and Day by one.

Scott (68) briefly reached eight under with a sensational eagle at 15, only to three-putt for bogey at the next hole, while Koepka – one of two overnight leaders along with Bryson DeChambeau – recovered impressively from a shaky start and birdied the last for a 71.

Xander Schauffele was the only man to beat Oosthuizen's score, shooting 65 to join Woods, Justin Harding (69) and Dustin Johnson (70) at six under.

Ian Poulter (71) and Jon Rahm (70) were a shot further back with Phil Mickelson (73) among those three off the pace on a congested leaderboard.

DeChambeau tumbled from a share of first down to tied 16th courtesy of a 75, but Jordan Spieth enjoyed a more positive day, shooting 68 to get to one under for the week. Spieth – a perennial contender at Augusta – went out in 40 on day one.

Pre-tournament favourite Rory McIlroy has plenty of work to do after he shot 71 to sit seven off the pace at even par, while world number one Justin Rose and the respective Masters champions of 2016 and 2017, Danny Willett and Sergio Garcia, all missed the cut at four over.

Ian Woosnam, who won this event in 1991, confirmed he would not compete at Augusta again due to the strain it places on his body, after a 76 left him 12 over.