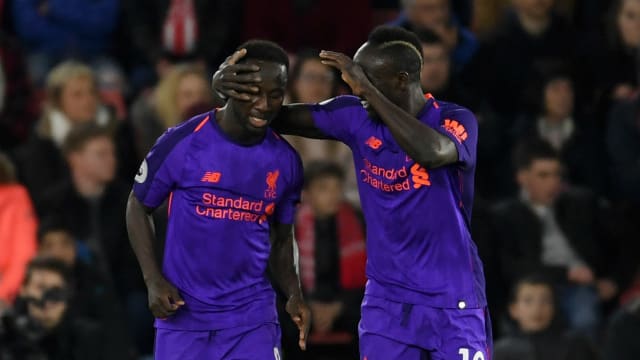 Sadio Mane insists Liverpool supporters have yet to see the best of team-mate Naby Keita following his indifferent debut campaign in the Premier League.

Troubled by injuries, Keita has started just 13 of Liverpool's 33 top-flight matches since his arrival from Bundesliga club RB Leipzig.

However, the Guinea international got off the mark with his first goal for the Merseyside club in last week's 3-1 league win at Southampton and followed that up with another crucial strike in Tuesday's 2-0 Champions League victory over Porto.

Mane, who previously played with Keita at Salzburg, believes the midfielder is now growing in confidence but still has some way to go to reach his peak at Anfield.

"I knew him from a long time ago, from the first time he came to Salzburg and he was the same," Mane said, according to quotes on Sky Sports.

"At the beginning at Salzburg it was very tough for him, but he never stopped working hard. He was not playing for a while and he was really positive and after he was the star of the team. I am 100 per cent sure he will do incredibly well.

"To be honest I think we have more to see from him. At the moment it is going well for him and everyone is very happy for him.

"The real Naby is coming still. He played well the last two games. I know him very well and there is more to come. I think goals always give him more confidence. He scored two goals and I think it boosts his confidence."

Another goal and another BIG performance.

Naby Keita is your @carlsberg Man of the Match! pic.twitter.com/WFofgAtKIP

Mane has not looked back since moving to England, impressing with his performances at Southampton to earn a big-money move of his own to Liverpool, and he has played a part in helping Keita adapt to life in a new country.

“It is not easy to move from Germany to change club, especially as the league is not the same," he added. "I just talked to him to do what I can.

“It is part of the things you have to deal with and he is working hard every single day. I spend a lot of time with him, yes, and off the pitch I am very happy for him, he’s very relaxed."

Liverpool return to league action on Sunday with a home game against Chelsea.