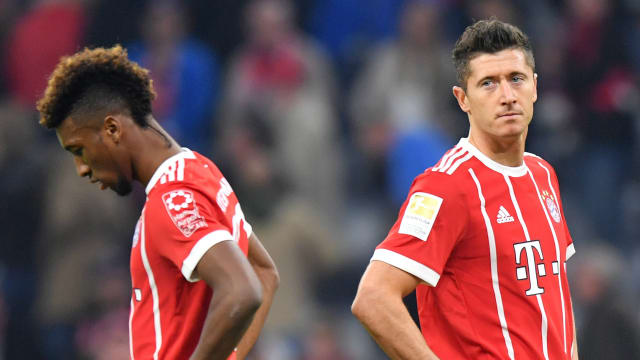 Defenders Niklas Sule and Jerome Boateng are said to have separated the pair in an incident that could disrupt squad harmony ahead of the final six games of the Bundesliga season.

The club have not handed down any sanctions and Kovac insisted the star attackers have resolved their spat.

"There was a fight between two players who were named in the media," Kovac said on Friday.

"The three of us discussed it after training, and both apologised for their behaviour and were sorry for what happened.

More from #Kovac: "No-one is being fined because both players were understanding, and being understanding is very important. The matter is done and dusted now."#FCBayernpic.twitter.com/9iK1mZZ20D

"No one is being fined because both players were understanding, and being understanding is very important now. The matter is done and dusted.

"No further questions will be answered. Now it's all about the upcoming game [against Fortuna Dusseldorf on Sunday]."

Lewandowski's future in Munich remains unclear as despite previously expressing an interest in a new challenge, with Real Madrid regularly mentioned as a possible destination, he is reportedly close to signing a contract extension.