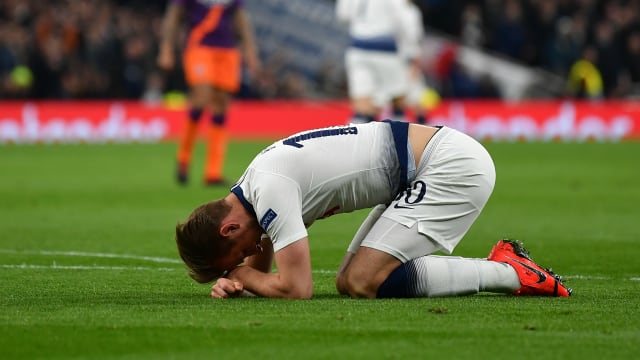 Mauricio Pochettino has said he does not expect Harry Kane to feature again for Tottenham this season unless they reach the Champions League final.

The England international was substituted with an ankle injury after 58 minutes of his side’s 1-0 win over Manchester City in the first leg of their quarter-final tie on Tuesday.

City defender Fabian Delph inadvertently caught Kane when the striker tried to block a clearance, leaving Pochettino fearing the worst after the game.

Tottenham confirmed on Thursday that their leading scorer suffered a "significant lateral ligament injury" to his left ankle - a repeat of the damage sustained against Manchester United in January that ruled him out for just over a month.

Pochettino is unsure whether the 25-year-old will be back on the field again before the Premier League season ends on May 12, though Spurs could still be in Champions League contention at that point, with the final of the competition scheduled for June 1.

"He feels sad and disappointed like everyone at the club. It's a tough moment for him, the team and us," Pochettino told reporters at Friday's news conference.

"We need to assess him every day, but we need to have proper answers to see when he can possibly start training with the team.

"Today it is impossible to give a date. He suffered a similar injury last time against Manchester United and that took five weeks, and if we arrive in the final of the Champions League maybe he would have the possibility to play, but we'll see.

"We need to assess him but he's not in a great place which is normal after a few days."

Some magic moments from the birthday boy!

Tottenham also lost Dele Alli to injury during their European win against City, the midfielder having to be replaced late on after injuring his hand.

Pochettino is more optimistic over Alli and while he has not yet ruled the midfielder out of contention for Saturday's home game against Huddersfield Town, it is more likely he returns in time for the second leg against City.

"‘He broke his hand and we need to assess today and see if he can be involved tomorrow," Pochettino added.

"I’m not optimistic about tomorrow. I am more optimistic he will be available for Man City in the second leg. We’ll see and we’ll take decision that is best for everyone."

Serge Aurier, Eric Dier and Erik Lamela are Tottenham's other confirmed absentees for the visit of relegated Huddersfield.