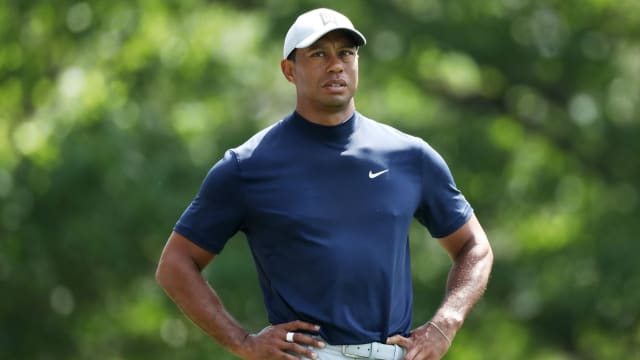 Tiger Woods made an encouraging start to the Masters on Thursday, carding a two-under 70 to sit one shot off the lead despite struggling for form with the putter.

Woods briefly held a share of first place after birdieing the 13th and 14th, but a bogey at 17 ensured he finished his opening round one stroke behind a group of three men that included playing partner Jon Rahm.

A first-round 69 for Rahm matched the scores of 2013 champion Adam Scott and Justin Harding.

Scott birdied three of the last four holes to join the leading group, while Woods endured something of a sloppy finish after playing well for most of the day.

The 14-time major champion can still be satisfied with his initial work and will no doubt be aware that three of his previous four successful Masters campaigns started with rounds of 70.

However, having driven the ball well for the most part and given himself plenty of chances, Woods proved unreliable with his shortest club, missing a number of putts from inside 10 feet on a day that could have been so much better.

Tiger cards his 9th consecutive round of par or better in Major Championships.#TheMasterspic.twitter.com/90XatatUke

Pre-tournament favourite Rory McIlroy, playing in the group behind Woods, endured an up-and-down day as he carded a one-over 73 featuring five birdies and six bogeys.

McIlroy had plenty of work to do after bogeying the 10th and 11th to slip back to two over. He birdied both back-nine par fives and the 16th to get into red figures, only to drop shots on each of the last two holes.

Those at two under and in the clubhouse alongside Woods included Patton Kizzire, Lucas Bjerregaard, Cameron Smith, Rickie Fowler and Corey Conners, who came through a six-way play-off in a Monday qualifier to book his place at last week's Texas Open, and then won that event to earn a place at Augusta.

Dustin Johnson and Phil Mickelson were also one off the lead, albeit with half of their rounds still to play, but fellow late starters Justin Rose and Jordan Spieth were struggling badly at four over through nine.

Patrick Reed began his title defence with a one-over 73 featuring an eagle at 13, two birdies and five bogeys. The last Masters winner to start the tournament with an over-par round was Woods in 2005.