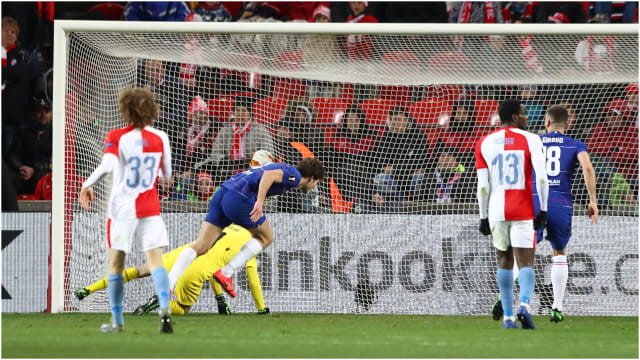 Marcos Alonso snatched a precious 1-0 away win for Chelsea in their Europa League quarter-final first leg at Slavia Prague on Thursday.

The Blues started with N'Golo Kante and Eden Hazard on the bench and were outplayed for long periods until Alonso headed in an unlikely winner four minutes from time.

Victory was scarcely deserved for Chelsea, with Kepa Arrizabalaga starring in the away goal and the notion of a kind draw for the visitors put to bed by an excellent Slavia display.

But Maurizio Sarri's decision to rest key men was ultimately justified as his side prepare to visit Liverpool on Sunday in complete control of this European tie ahead of next week's return leg.

Willian almost stole the opener against the run of play, crashing a superb 20-yard strike off the crossbar, but the hosts were well on top once more by the interval.

Hazard was called from the bench after almost an hour of Chelsea toil and they immediately clicked into gear, with Ondrej Kolar blocking well from Antonio Rudiger before Willian drilled just wide.

The Blues left spaces at the back to exploit, though, and only a smart Kepa parry denied Ibrahim Traore a breakaway winner, while the goalkeeper later kept out an acrobatic Jan Boril effort.

And those saves gave Chelsea the foundation to chase a vital goal that arrived as Willian's deep cross picked out Alonso for a powerful downward header.