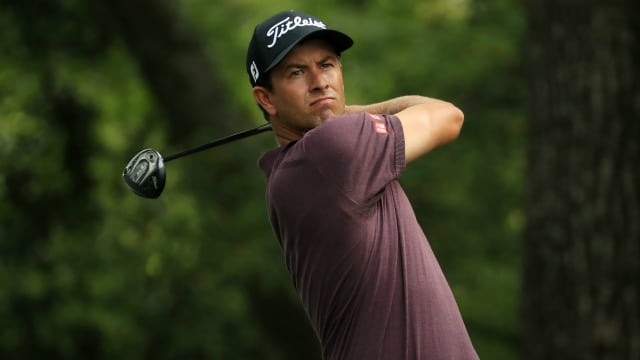 Adam Scott recognised the importance of making a fast start at the Masters having been slow out of the blocks in recent visits to Augusta.

The Australian was in a share of the clubhouse lead with Jon Rahm and Justin Harding having opened with a three-under-par 69 on Thursday.

It was Scott's lowest opening round since he was defending champion in 2014, with the past two years seeing him begin with scores of 75.

"Yeah, it is [nice to start well]," former world number one Scott admitted when addressing reporters.

"I mean, one of the things in, generally in my career, I'm kind of a slow starter, certainly the last 10 years, I don't jump out of the gates, it seems.

"So, I don't know if this is jumping out of the gates, but it certainly is great."

Scott added that arriving at Augusta as a past champion can be a relaxing factor.

"I've talked a lot about kind of being at peace with the golf course and understanding it can give you a lot," he added.

"It can take it away as well, but certainly I feel like there's a lot of good karma if you treat it right out there.

"And Fred Couples played great around here for some years, a past champion, a lot of past champions have a great rapport with this golf course and I think I kind of get that feeling too, so it does give you a little pump."

Justin Harding is in the Clubhouse at three under but the field is in chase.#themasters Leader Board https://t.co/KPOdYIDIITpic.twitter.com/ADk39HYbFj

Asked if those experiences are a boost out on course, Spaniard Rahm replied: "I have a lot of good memories around here.

"I think the only rough round I really had was the half, actually the back nine of 2017, my last day, my body was just worn out.

"It feeds into the player that I like to be, that creativity, that special thing that Augusta National has that brings the best out [of me].

"Just being here and hitting some of the shots we're hitting and being able to hit the putts, the crazy putts where your back is against the hole and things like that is just a lot of fun.

"When you can get it done and get a few good up and downs to save a round, it's definitely a lot of fun."