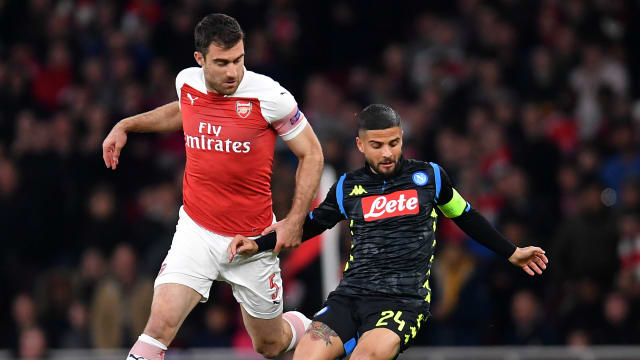 Lorenzo Insigne said Napoli had one of their worst performances of the season after losing the first leg of their Europa League quarter-final at Arsenal 2-0.

Aaron Ramsey's opener and a Kalidou Koulibaly own goal left Napoli with it all to do in the return fixture at the Stadio San Paolo next Thursday.

Insigne wasted a big chance to reduce the deficit moments before half-time, while Piotr Zielinski missed an opportunity to secure a late away goal when set up by the Italy forward.

And Napoli's captain accepted he felt guilty about blazing over the crossbar, while highlighting the failures of his side in the first half.

"I am still thinking about that chance, because an away goal would have been important," Insigne said to Sky Sport Italia. "I got there too stretched out, it went badly.

"We have to think about the errors we made and ensure we don't make them again, because we've got it all to do next week.

"We lacked some courage at the start, it was one of our worst performances of the season, but we need to focus and do it differently in the second leg.

"Arsenal are a great team, we saw that tonight and already knew before. Having said that, we had the chances to score and they were simply more effective with their scoring opportunities.

"We must play with the right determination and intensity next Thursday to turn this around."

Still a lot of work to be done but a solid start from the boys  pic.twitter.com/tpmAV2hhgw

Napoli were grateful to goalkeeper Alex Meret for a string of saves that leaves them with hope ahead of the second leg, especially as they have only lost once at home since March 2018.

"It was an ugly first half from us, we made a lot of mistakes and were imprecise," Meret told Sky Sport Italia. "We needed more bravery playing out from the back.

"However, we played much better after the break and created the chances. We know it'll be very difficult, but we believe that we can turn it around in the second leg.

"We weren't as sharp as we should have been and the things we tried in training didn't come off. There were definite improvements after the break and we have to build on that.

"Arsenal above all struggle when we try to slice their defence open, so we need to work on that in the second leg. We have the San Paolo crowd behind us in the second leg and will give it our all."