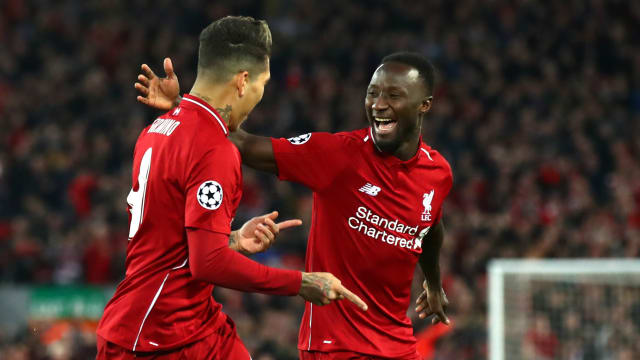 Keita opened the scoring at Anfield on Tuesday, with Roberto Firmino also on target during the 2-0 victory in the first leg of their quarter-final tie.

Guinea international Keita has scored in successive games having found the net in Liverpool's comeback triumph at Southampton in their last Premier League game.

And, after a slow start to Keita's Liverpool career, Van Dijk feels the former RB Leipzig midfielder is now producing his best football.

"He's a fantastic player. We see it day in, day out," Van Dijk told Liverpool's website. "I'm just very happy for him that he's starting.

"To score two goals in the last two games is very pleasing for him, but very important for all of us. I'm very happy for him.

"Obviously we knew it's going to be a tough game and to score two good goals was very important, but the clean sheet was the most important thing. We have something to build on.

"We kept pressing, we kept going - we played very well I think. Obviously in the second half they tried to change it up a little bit.

"[There were] some moments of danger, but I don't think clear chances really. But we need to do it a little bit better, especially in the second half."

Another goal and another BIG performance.

Naby Keita is your @carlsberg Man of the Match!   pic.twitter.com/WFofgAtKIP

Liverpool are in a strong position ahead of next week's return at the Estadio do Dragao but Van Dijk warned the job is not done yet for the Reds.

"It's a good result. If we score one then it's going to be even more difficult for them to go through," Van Dijk added.

"But the only thing is that we go in there to play our game, so hopefully we will create chances and finish them off.

"It's going to be tough because their fans are pretty extreme, like here, and I'm definitely going to enjoy that."