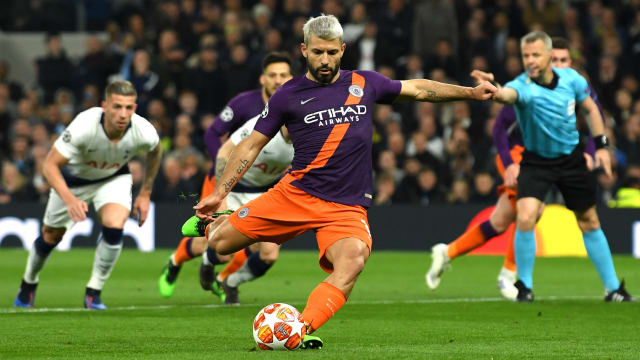 City are tasked with overturning a 1-0 quarter-final deficit against Tottenham after Son Heung-min struck 12 minutes from time in a tense and frantic first leg in north London on Tuesday.

Aguero passed up a golden chance to give City an early advantage and an away goal when Hugo Lloris palmed away a 13th-minute penalty, denying the Argentina striker his 30th goal of the season in all competitions.

It was the 30-year-old's 11th penalty miss for City and sixth in Champions League matches, including a pair of failures in the qualifying round against Steaua Bucharest in 2016, when he shrugged off those disappointments to claim a hat-trick by full-time.

Such consistently prolific returns convince Fernandinho that Aguero remains the most likely player to step up decisively for Pep Guardiola's men in next Wednesday's second leg at the Etihad Stadium.

"This can happen with everyone," the Brazil midfielder said of Aguero's fluffed lines from 12 yards.

"Now the most important thing is just supporting him because we know his capacity.

"We know his ability and when you need him he is going to solve our problems."

9 - Spurs have progressed to the next round on each of the last nine occasions they’ve won the first leg of a European knockout match (excluding qualifiers). Advantage. #TOTMCIpic.twitter.com/G13rFGhF43

City find themselves chasing the tie after Guardiola opted for a surprisingly safety-first approach, one seemingly informed by last season's damaging 3-0 first-leg loss to Liverpool at the same stage and the Champions League collapses he oversaw at Bayern Munich against Real Madrid and Barcelona.

Fernandinho was joined at the base of the visitors' midfield by Ilkay Gundogan and, although the tactic helped to restrict Tottenham's opportunities in front of goal, a City attack deprived of the injured Bernardo Silva failed to function with its usual smoothness and fluidity.

"You can see we played a little bit different, especially in a defensive way with two holding midfielders," Fernandinho explained, with his manager's tactics on a major European occasion once again placed under the microscope.

"We tried to close the midfield because they try to concentrate their game in the middle. We tried to do that, and we did so well, but at the end we conceded a goal.

"We are going to see if Pep likes it for the next game otherwise we will change and try and go for the game and win the game."

The reigning Premier League champions now head into a crunch weekend of their title defence, with a trip to Crystal Palace coming before rivals Liverpool host Chelsea.

City progressed to the FA Cup final last weekend and already have the EFL Cup secured, meaning talk of an unprecedented quadruple mounted before the trip to Tottenham.

However, Fernandinho insists they cannot allow this to become a distraction.

"I personally don't think about that. Just take it game by game because if you start thinking a lot of things about that you are just going to get confused," he added.

"The most important thing is to just take it game by game. We have a tough game against Crystal Palace on Sunday and it is going to be massive for us in the title race."