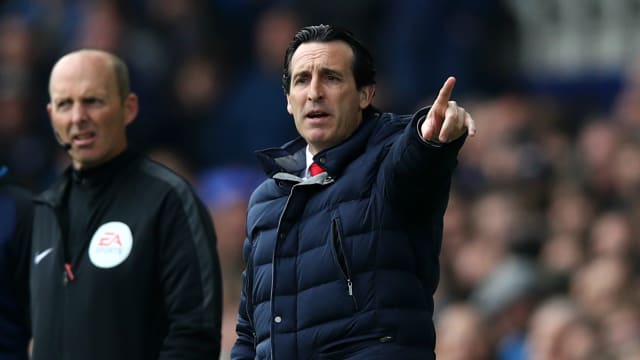 Unai Emery admitted Arsenal missed a big opportunity in their timid 1-0 loss to Everton but is adamant there will be more chances to cement a top-four spot.

A point would have been enough to overtake Tottenham in third but the visitors failed to match Everton's enthusiasm in an extension of the away woes that have produced just six points from the last 27 available on the road.

Fifth place beckons if London rivals Chelsea avoid defeat at home to West Ham on Monday and Arsenal could come to rue their lacklustre effort on Merseyside with the race for Champions League qualification intensifying.

"We knew it was going to be difficult and that we are going to have to take opportunities like today," Emery said.

"We lost a great opportunity today to take three points. We will have more chances in the next matches. It depends on us and also on other teams.

At Goodison Park and online, thanks for backing us today

We'll give our all to make it up to you in our final games of the season #EVEARSpic.twitter.com/OB7Zw7x0Ej

"We can be negative because we lost three points, but it's in our hands to continue to take chances to be in the top four."

Doubts over Aaron Ramsey's ability to manage a groin issue for 90 minutes forced Emery to leave the in-form Wales star on the bench for the first half and Everton completely overran the starting midfield pair of Matteo Guendouzi and Mohamed Elneny, who was withdrawn at the break.

Granit Xhaka (groin) and Laurent Koscielny (foot) were left out of the squad altogether and both players could miss Napoli's visit to Emirates Stadium in the first leg of the Europa League quarter-finals.

"I want to be positive for Thursday, it depends on how he's progressing. Xhaka is the same. They are going to be doubts for Thursday.

"When you lose one match, maybe you can look at the players who didn't play, but I think it's rarely the consequence.

"We've won matches with other players, other systems, and we need to be efficient in each moment."