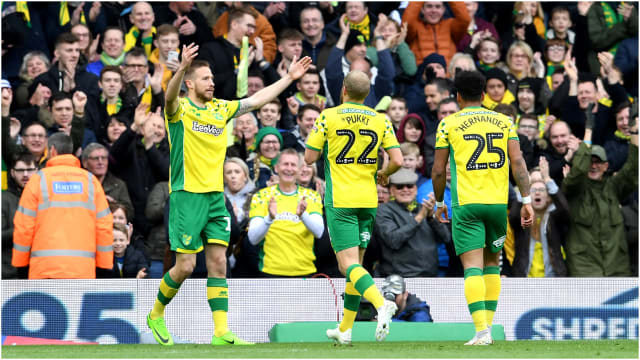 Norwich City moved eight points clear at the top of the Championship with a ruthless 4-0 defeat of managerless QPR in Saturday's early game.

With second-placed Leeds United and third-placed Sheffield United not in action until later in the day, Norwich took another step towards promotion, at least temporarily striding 10 points ahead of the Blades.

QPR were playing for the first time since Steve McClaren's sacking in the week and they showed little fight at Carrow Road, with a new manager yet to be confirmed.

It took Norwich just six minutes to break the deadlock as Emiliano Buendia was left unmarked in the area to sweep home, and the second soon followed when Marco Stiepermann's low drive crept past Joe Lumley.

Further chances came and went for the dominant hosts before Luke Freeman gifted the ball to Buendia shortly before half-time and he fed Teemu Pukki to coolly add number three.

Norwich took their foot off the gas following the interval and their afternoon was marred by a red card for the excellent Buendia following a senseless lunge on Josh Scowen, but QPR never threatened a response and Pukki slammed in his second late on.

Pukki latches on to a long Trybull pass and he finishes past Lumley! #ncfc