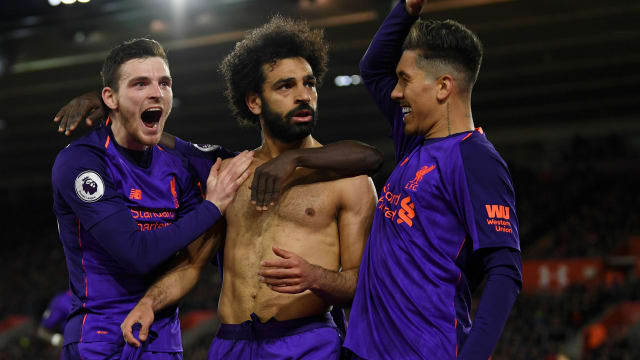 Mohamed Salah scored a brilliant solo goal and Jordan Henderson struck late as Liverpool won 3-1 at Southampton to move back above Manchester City in the Premier League title race.

Liverpool needed a Hugo Lloris error to beat Tottenham 2-1 last time out and they rode their luck again at St. Mary's Stadium on Friday, Jurgen Klopp's side showing their nerves.

Shane Long's 50th Premier League goal had put Southampton into an early lead but Naby Keita's first strike for Liverpool ensured the scores were level at the interval.

Salah's dry spell has been well-documented but he ended his eight-game wait for a goal in the 80th minute, embarking on a long solo run before finishing superbly.

And captain Jordan Henderson then made sure of the win for the Reds with four minutes to go by turning home a Roberto Firmino low cross, as the Reds went two points clear at the top, albeit having played a game more than City.

Games taken to net 50 @premierleague goals for the Reds…

Liverpool made a slow start and Southampton led in the ninth minute.

Ryan Bertrand was given too much time and space to deliver a left-wing cross that Pierre-Emile Hojbjerg flicked on at the near post, with Long left unmarked to sweep home.

Sadio Mane directed a free header straight at Angus Gunn in response before Virgil van Dijk turned another dangerous Bertrand cross over his own crossbar.

Gunn was beaten in the 36th minute, though, Liverpool keeping Southampton pegged in and Keita heading home Trent Alexander-Arnold's cross at the end of a sustained period of pressure.

James Milner and Henderson had been left out of the starting line-up by Klopp but he turned to the duo early in the second half as Liverpool struggled to break Southampton down.

Keita appealed for a penalty but appeared to go down easily under Maya Yoshida's challenge, with Liverpool needing Salah to break his drought to nudge ahead.

The goal came from a Southampton corner, with Henderson sending Salah on a long run through the Saints half, the Egypt forward keeping cool to beat Gunn from the edge of the box.

Southampton, not yet sure of avoiding relegation, had to throw men forward in search of an equaliser and Liverpool duly killed the game with a clinical break, Firmino teeing up Henderson as the Reds moved back above City.