I am not happy - Silva criticises Pickford for weekend scuffle 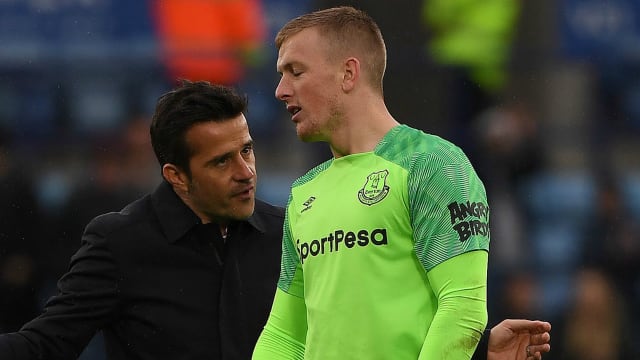 Marco Silva says he is "not happy" with Jordan Pickford and hopes the Everton goalkeeper has learned from his involvement in a scuffle last weekend.

Everton launched an investigation on Monday after footage emerged on social media appearing to show the England international getting involved in a fracas outside a bar in Sunderland.

Pickford has found his form under scrutiny at times this season, most recently for his display in Everton's 3-2 loss at Newcastle United last month, but he has responded with back-to-back clean sheets against Chelsea and West Ham.

The 25-year-old has faced the wrath of his manager, though, as Silva feels the club have done everything to protect their players from off-field incidents of this nature.

"For us as a manager and us as a club I am not happy," he said at a news conference ahead of Sunday's home Premier League clash against Arsenal. "The player is not happy with what happened.

"As football players they have an obligation. It is clear to them. It is a matter for us to remind him. Everything we must do we have already done."

Asked what lessons Pickford, a key member of England's squad in last year's run to the World Cup semi-finals, can take, Silva said: "Many, many things. It's a big learning [curve] to him everything that has happened.

Silva does not intend to drop Pickford for this weekend's showdown with fourth-placed Arsenal, however, adding: "He has had full focus during the week to prepare for the next match."

Pickford has started every Premier League for Everton this season, keeping 10 clean sheets.