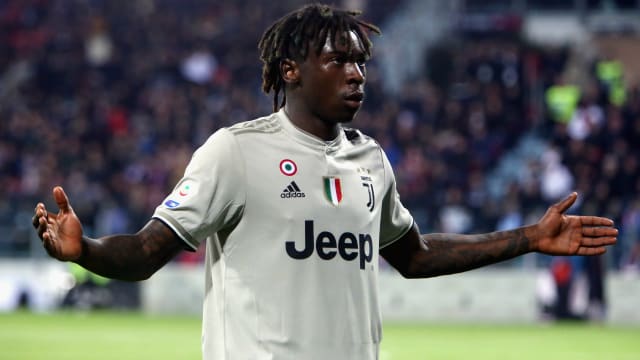 Leonardo Bonucci did not mean to "massacre" Moise Kean with comments he made following alleged racist chanting during Juventus' game against Cagliari, according to Gennaro Gattuso.

Kean, 19, was targeted during Juve's 2-0 midweek win and celebrated his late goal, the fourth he has scored in as many appearances for club and country, in front of the home fans.

Bonucci initially claimed the blame for the abuse aimed at Kean was "50-50" between the player and Cagliari fans, comments that provoked widespread criticism throughout the football world, including from Raheem Sterling and Yaya Toure.

The centre-back later clarified his words on social media, claiming he was "clearly misunderstood" and was "too hasty in the way I expressed my thoughts", and he has been defended by Juve head coach Massimiliano Allegri ahead of Saturday's visit of AC Milan to Turin.

And Rossoneri boss Gattuso also spoke up in defence of Bonucci, as he addressed the incident in his pre-match news conference.

"The fact is that in Italy you can't talk about anything, unfortunately," Gattuso said. "We need to understand why Leonardo spoke like this.

"Kean is a boy born in 2000 and still needs advice. I read his [Bonucci's] words well and he didn't want to massacre anyone.

"But, being older, he just wanted to help the boy and make him feel more at ease."

Dopo 24 ore desidero chiarire il mio pensiero. Ieri sera ho parlato alla fine della partita e mi sono espresso in modo evidentemente troppo sbrigativo, che è stato male interpretato su un argomento per il quale non basterebbero ore e per il quale si lotta da anni. Condanno ogni forma di razzismo e discriminazione. Certi atteggiamenti sono sempre ingiustificabili e su questo non ci possono essere fraintendimenti. // After 24 hours I want to clarify my feelings. Yesterday I was interviewed right at the end of the game, and my words have been clearly misunderstood, probably because I was too hasty in the way I expressed my thoughts. Hours and years wouldn't be enough to talk about this topic. I firmly condemn all forms of racism and discrimination. The abuses are not acceptable at all and this must not be misunderstood.

Kean has emerged as one of Europe's most talented young players this season, the striker scoring in successive Euro 2020 qualifiers for Italy last month.

"He's strong, he manages to combine talent and physical strength," Gattuso said of Kean. "Allegri said he must stay calm and I agree with him, he is a boy born in 2000 and must keep low and at the same time work on what are his areas for improvement."

Milan go to runaway league leaders Juve - who can secure the league title this weekend - looking to end a run of three games without a win, a slump that has dented their Champions League qualification hopes, though they still sit in fourth place in the table.

"It is no coincidence that for years they have won the championship, it is their strength," Gattuso said of Allegri's side.

"You don't win just because you have great players, they have people who know how to cope with pressure. They are impressive in this respect.

"Right now we need a great performance, which leads to victory and we can start again. There are eight games left.

"Juve teaches us - against Atletico [Madrid in the Champions League] they seemed dead but in a game their season has changed. We can do the same."