Bonucci made a mistake over Kean comments, insists Sarri 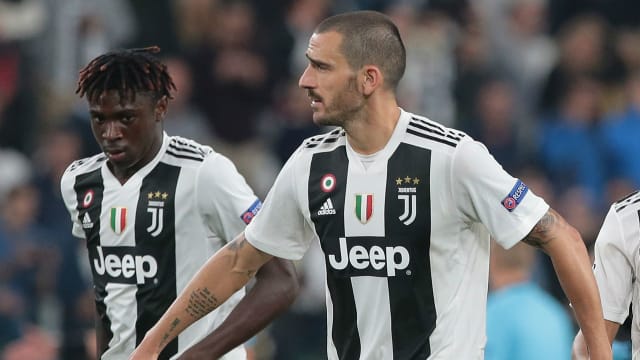 Maurizio Sarri says Leonardo Bonucci's comments in the aftermath of alleged abuse towards Moise Kean by Cagliari supporters were a "mistake" but insists the Juventus defender is "not racist".

Kean's fine display in his side's 2-0 Serie A win against Cagliari on Tuesday was overshadowed by allegations that the 19-year-old, who scored Juve's second goal, was the target of racist taunts.

The Italy international celebrated his late strike in front of Cagliari's supporters, and team-mate Bonucci said after the game that Kean should take 50 per cent of the blame for the incident because he incited the home crowd.

Defender Bonucci later clarified his remarks via social media, saying that he was "too hasty" in expressing his thoughts and "firmly condemned racism".

"I was surprised at this happening in Cagliari. Usually it is a good atmosphere, so I was surprised," he told a media conference.

"Bonucci made a mistake but I am sure he probably wanted to say something different because I am sure Leonardo is not racist.

"He made a mistake. We can only be an example for people but it's difficult to solve the problem [of racism in football]."

Sarri's Chelsea take on West Ham in the Premier League at Stamford Bridge on Monday.