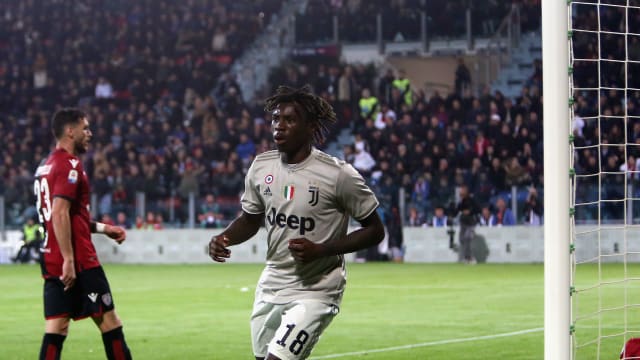 Kean was the target of jeers and whistles throughout the contest at the Sardegna Arena and celebrated his goal, which sealed a 2-0 win, in front of the home supporters with his arms outstretched.

After Kean's gesture, the goalscorer and Juve's France midfielder Blaise Matuidi were visibly angered and an announcement was made at the stadium to warn fans against offensive behaviour.

The Italy striker later posted an image of his celebration on Instagram with the caption "The best way to respond to racism", while he received support from team-mates and several players across the globe.

However, Bonucci found himself the target of criticism for initially claiming that the blame was "50-50" between the fans and Kean, who he felt had incited the supporters.

He subsequently sought to clarify his comments, saying he was "too hasty" in expressing his thoughts and "firmly condemned racism".

Former Juve defender Thuram, though, believes Bonucci's initial reaction was just as damaging as the abuse Kean received from the stands.

Speaking to Le Parisien, the World Cup winner said: "When you think about it, Kean's own team-mate says he deserves these cries of monkey, and that the fans can continue!

"Bonucci's reaction is as violent as the monkey chants.

"Bonucci is not stupid. Bonucci's comments are just shameful. We must agree on racism."

The best way to respond to racism  #notoracism

Thuram also condemned the lack of action from football's governing bodies, suggesting if they did not take a firmer stand players will continue to be targeted.

"Did the referee stop the match? Has anything been done? We are in full hypocrisy," he added. "This has been going on for years. Everyone says we'll stop the game next time and it does not happen.

"The observation is that the football authorities do not care. If it really disturbed them, the match would have been stopped, believe me. The teams would have left the field and we would have found a solution."

But Thuram is keen to stress racism is not just a problem Serie A needs to tackle.

"You must not fool yourself," he said. "This is more visible in the Italian stadiums, but the underlying problem of racism is not limited to stadiums or Italy alone.

"[Raheem] Sterling has encountered problems elsewhere than in Italy, right?"