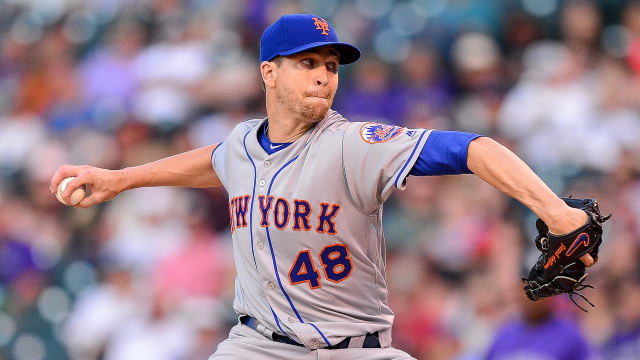 Jacob deGrom dominated for the New York Mets, but home runs continued to fly in MLB on Wednesday.

The highest percentage of home runs per hit in a single season is 14.5, which was set in 2017. Coming into the day, balls were flying out on 14.7 per cent of all base hits.

But as crazy as the home run numbers are, deGrom is still dominating, and he is not alone.

The ace tossed seven innings of scoreless baseball with 14 strikeouts in New York's 6-4 win over the Miami Marlins – his 26th straight quality start – and he was joined by several other starters who posted not only quality starts, but fabulous stat lines.

It was a great night for hitting as there were again home runs all over the place – including deGrom, who hit the sixth home run for a pitcher already this season – but the starters are having their success despite the balls leaving the park.

Nationals outfielder Juan Soto came a triple short of the cycle while going three for four with three RBIs and a walk in Washington's 9-8 win over the Philadelphia Phillies.

Kris Bryant and Javy Baez both went 0 for five with three strikeouts in the Chicago Cubs' 6-4 loss to the Atlanta Braves.

While Aaron Sanchez (1-0, 0.00 ERA) might not get the same attention as Trevor Bauer (0-0, 1.29), he has some of the nastiest stuff in baseball when he is fully healthy. He has his health right now, and it will be fun to see his stuff next to Bauer's in a head-to-head matchup.