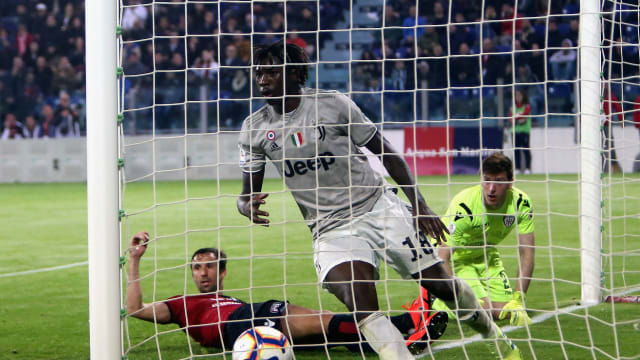 Giorgio Chiellini believes Moise Kean can be the symbol of a new era for Italian football after the teenage Juventus striker was racially abused during Tuesday's 2-0 win at Cagliari.

Kean scored a sixth goal in his past seven outings for club and country to crown Juve's 26th victory of a dominant Serie A campaign and celebrated by holding his arms outstretched in front of the home fans.

The 19-year-old later posted an image of the celebration to his Instagram account with the caption: "The best way to respond to racism".

Kean and team-mate Blaise Matuidi were angered by the incident, where the former was seemingly subjected to further racist abuse and an announcement was made on the public address system at the Sardegna Arena to warn fans against offensive behaviour.

In remarks that have already provoked a backlash, Juve centre-back Leonardo Bonucci claimed the blame for the incident was "50-50" between Kean and those in the stands following his provocative celebration.

But his defensive colleague Chiellini saw things differently and spoke only in glowing terms about his young team-mate.

The best way to respond to racism #notoracism

"The only thing I want to say is that Moise is an asset to Italian football," he told Juventus' in-house television channel.

"He's a golden boy who is doing the best he can, so he mustn't be targeted for what he isn't.

"I've reviewed the images because, on the pitch, you don't even realise what's happening and he did nothing.

"We must think of Moise as we do [Nicolo] Zaniolo, [Federico] Chiesa and [Nicolo] Barella - as a positive figure for Italian football because he deserves it."

Chiellini added: "The only thing he did wrong tonight was the dive, which he certainly won't do again.

"He's here to learn, he's 19, but he's a very good lad and he didn't deserve the insults he received."

Matuidi also posted on Instagram in support of Kean and agent Mino Raiola, who represents both players, strongly condemned the incident.

A post shared by Blaise Matuidi Officiel (@blaisematuidiofficiel) on Apr 2, 2019 at 2:47pm PDT

"You can't be Italian and racist at the same time," he told AFP.

"I'm with Kean and Matuidi, for me racism is synonymous with ignorance.

"No-one can or should justify it. I'm proud of my lads and I'm with them all the way."

Cagliari president Tommaso Giulini told Sky Sport Italia he did not think the abuse aimed at Kean was of a racist nature.

"If [Federico] Bernardeschi had celebrated like that, the same thing would have happened," he said.

"All I heard were whistles and jeers, but if you with your microphones picked up a few isolated racist insults, then of course those were wrong.

"But there's no need to be self-righteous about it and cast a shadow over the entire Cagliari fanbase or the club."