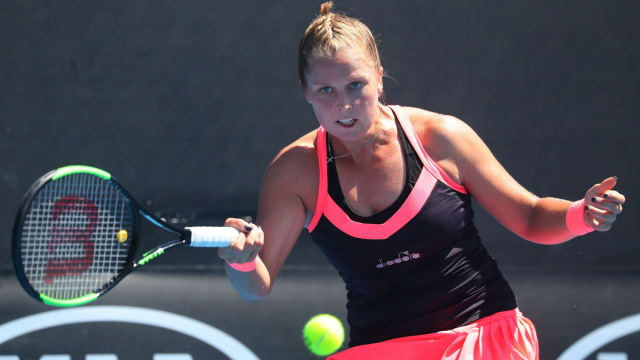 Shelby Rogers played for the first time in 13 months and advanced past Evgeniya Rodina at the Charleston Open, while former finalist Kirsten Flipkens reached the Monterrey Open second round.

American Rogers had not played since undergoing knee surgery after sustaining an injury at the 2018 Indian Wells Open, where she suffered a first-round loss.

But the Charleston native made a winning comeback on Monday, triumphing 6-4 6-2 against Rodina at the WTA Premier tournament.

"I don't remember the last time I cried after winning a first set. It's kind of embarrassing to be honest!" said Rogers, who will meet Jelena Ostapenko in the second round after the 10th seed defeated Johanna Larsson 6-1 6-4. "It was a great moment, I enjoyed every second of it - even when I got broken. That's part of it.

"It's all those feelings I missed so much: the adrenaline, the nerves, the excitement, everything. You can't recreate that outside of the arena."

No April fools jokes! This actually happened. Thank you to everyone that supported me and helped me get to this moment. I’m forever grateful. So happy to be back! Step 1 of many.... #VolvoCarOpen2019#Charlestonhttps://t.co/UpblL6ZBjO

In Monterrey, 2016 runner-up and sixth seed Flipkens accounted for Serbian teenager Olga Danilovic 6-2 6-1 to set up a clash with either Dalila Jakupovic or Harriet Dart.