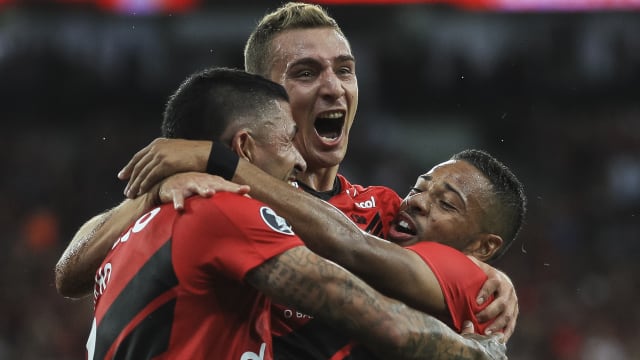 Boca Juniors were crushed by a Marco Ruben-inspired Athletico Paranaense in the Copa Libertadores, while Palmeiras also suffered their first loss Tuesday.

Last year's runners-up, Boca slumped to a 3-0 defeat to Athletico in Curitiba in Group G.

Ruben tapped in the opener nine minutes before half-time for what would be the start of a hat-trick.

The former Villarreal and River Plate forward, who is on loan from Rosario Central, struck again in the 69th minute, tapping in a Bruno Guimaraes cross.

Ruben sealed his hat-trick with nine minutes remaining when he headed in from close range for Athletico, who moved top of Group G at the expense of Boca.

He became just the second player to score a hat-trick against Boca in the Libertadores, after Jose Castillo – for Bolivar in 2004.

In Buenos Aires, Palmeiras were handed their first defeat in Group F with a 1-0 loss to San Lorenzo.

Marcelo Herrera's second-half goal lifted San Lorenzo top of the group, one point ahead of Palmeiras.

Junior were left point-less in the group after a 1-0 defeat at Melgar.

In Group D, San Jose and LDU Quito played out a thrilling 3-3 draw that featured three own goals.

San Jose defender Cesar Mena netted two own goals, but his team came from behind to salvage their first point.

Reigning champions River Plate dropped to third in Group A – albeit with a game in hand – after Palestino beat Alianza Lima 3-0.

Cerro Porteno retained their perfect record in Group E, moving onto nine points thanks to a 1-0 victory at home to Nacional.