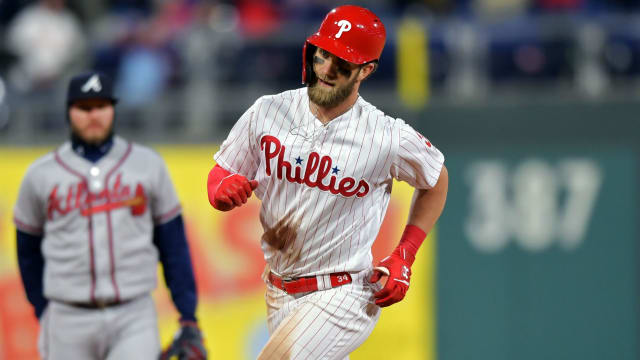 The Philadelphia Phillies stayed undefeated after accounting for the Atlanta Braves 5-1 in MLB action on Sunday.

Philadelphia are the only unbeaten team remaining following the opening weekend, having completed a three-game sweep of the Braves, who are still searching for their first win.

The Phillies started the Bryce Harper-era off on the right foot and Philadelphia are certainly happy to have him.

Harper hit a home run for the second consecutive game and there were no doubts where the ball was going. The 398-foot homer in the seventh inning pushed Philadelphia's lead to 4-1.

Andrew McCutchen also recorded a homer to start the team's scoring in the third inning. A bases-loaded walk brought in the Phillies' second run and JT Realmuto and Maikel Franco added to Philadelphia's total.

Realmuto hit a sacrifice fly in the fifth while Franco followed Harper with an RBI.

Jake Arrieta earned his first win of the season after pitching six innings, allowing just three hits while striking out six. Kyle Wright was tagged with the loss.

The Braves' only run came when Ronald Acuna Jr. scored on a passed ball in the third.

Next up for Harper and the Phillies? A two-game series against his former team the Washington Nationals, starting Tuesday.

Christian Yelich was the Milwaukee Brewers' star on Sunday. He started off Milwaukee's scoring with a home run in the first inning and then came back in the ninth with a double to left-center field to seal the 5-4 win over the St Louis Cardinals. The reigning National League MVP became the sixth player in MLB history to homer in each of his team's first four games of the season.

San Diego Padres pitcher Chris Paddack made his MLB debut and impressed in the team's 3-1 victory against the San Francisco Giants. He allowed only one run on two hits while striking out seven in five innings of work.

Sam Travis did not do much of anything when the Boston Red Sox's were trying to tie up their series with the Seattle Mariners. Boston needed some extra power from their line-up if they wanted to have a chance against the streaking Mariners, but the designated hitter went 0 for four at the plate. Seattle went on to win the game 10-8 and the series.

The Cincinnati Reds struggled in a 5-0 loss to the Pittsburgh Pirates. They only recorded four hits from three different batters. Matt Kemp went 0 for four. Four other players finished 0 for three, including Yasiel Puig.

Cody Bellinger hit his fourth home run in as many games as the Los Angeles Dodgers rallied to beat the Arizona Diamondbacks 8-7.

This is already @Cody_Bellinger's 4th homer of the season. pic.twitter.com/Xmf0OyJzsV

Trea Turner smacked a walk-off homer to give the Nationals a 6-5 win over the New York Mets.

Have a day, Trea.

The worst in the west take on the best in this late Monday game. But, the Mariners will not have it easy when the Angels come to town. Los Angeles nearly knocked off Oakland on Sunday and Seattle allowed Boston to score 24 runs in the team's four-game series.