Mayfield says playing with Beckham will be 'a lot of fun' 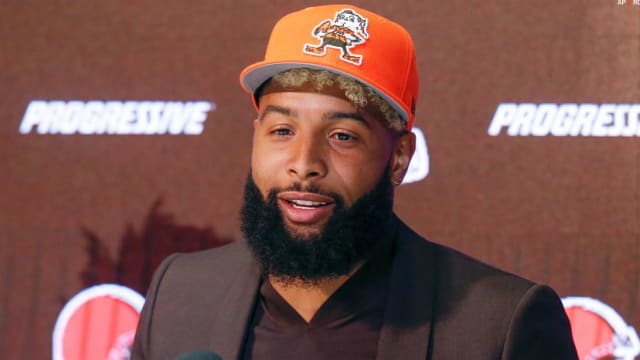 Beckham faced the media for the first time during his introductory news conference on Monday after he was dealt to the Browns by the New York Giants in a stunning trade last month.

Star receiver Beckham was sent from the Giants to Cleveland in exchange for two drafts picks and safety Jabrill Peppers.

Mayfield, who is set to enter his second season as Cleveland's quarterback, discussed his reaction to the deal.

"It's one of those things you can't put into words to describe it correctly," Mayfield told reporters. "I had two people at the house sitting there when I found out. I just started screaming, just yelling like you would have thought I was on the field on game day."

lol jk this is real. pic.twitter.com/eoRixUbwKD

"It's the potential," Mayfield said about Beckham. "His play and his ability speak for itself, but the things that we talked about all throughout last year of what we need, the types of guys we need in this locker room to go in the right direction, that's the best thing about that. He's a team guy and he's going to be a great presence for us in this locker room."

Beckham will join Jarvis Landry on the Cleveland depth chart at wide receiver. The two played together collegiately at LSU and are close friends.

"We feel like we spoke this into existence almost," Beckham said. "[Landry] and I dreamed of this. … I tell people all the time, [Landry] made me who I am today. He's taken me to a level of this greatness, this legendary stuff that we talked about, it's because of him."

Mayfield said he was excited to share the field with both Beckham and Landry.

"Realising the potential and all the talent that [Beckham] has, it's unique," Mayfield said. "Not many are able to do it. So, then you put together two LSU Tigers next to each other, it's a dangerous duo. It's going to be a lot of fun but it's something you can only dream about."

Mayfield completed 63.8 percent of his passes and threw for 27 touchdowns, along with 14 interceptions, in 14 games as a rookie last season. Cleveland finished with a 7-8-1 record.