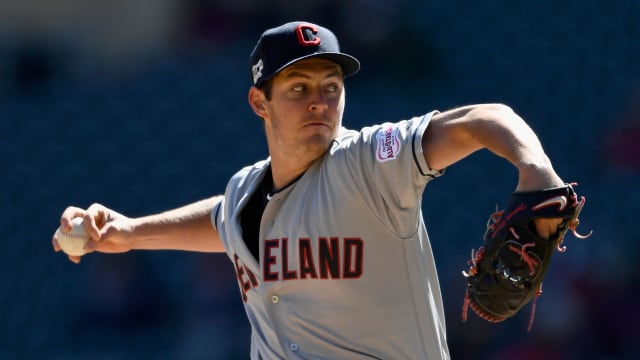 Trevor Bauer is on the shortlist for Cy Young contenders but Jake Odorizzi matched him pitch for pitch as the Cleveland Indians edged the Minnesota Twins in MLB on Saturday.

The Indians wound up coming away with a win, but it had little to do with what Odorizzi produced.

The 29-year-old right-handed pitcher tossed six innings of one-hit, one-run ball with 11 strikeouts with the only hit and run coming off the bat of Jose Ramirez's home run.

If Minnesota get consistent performances like that from Odorizzi they could very well get back to the playoffs this season.

11 strikeouts ties a career-high for @JakeOdorizzi!

That makes 24 strikeouts for our pitching staff in 15 innings this season. #MNTwinspic.twitter.com/TnphCyH5Sz

Bauer was great as well, tossing seven innings of one-hit, one-run ball with nine strikeouts and he showed off a new, nasty change-up.

This is a short film that was produced to show you that @BauerOutage 2K19 has officially arrived.#RallyTogetherpic.twitter.com/KQx8vRIiw8

Cleveland won the game when they scored a run off Blake Parker in the ninth inning to take a 2-1 lead they would never give up. More importantly though, the Indians' bullpen gave up no runs in two innings as Brad Hand earned his first save of the season.

It did not come without drama though as he allowed a hit and walked two in the inning.

The New York Mets nearly traded Jeff McNeil this offseason. On Saturday, he tallied his fifth career four-hit game. He has played in a total of 65 games and finished the day four for five with two runs scored and two RBIs in an 11-8 win over the Washington Nationals.

Freddie Freeman went four for five with two RBIs in the Atlanta Braves' 8-6 loss to the Philadelphia Phillies.

St Louis Cardinals second baseman Kolten Wong is hitting .600 through three games this year as he went three for three with a double, an RBI and a run scored in a 4-2 loss to the Milwaukee Brewers.

Tampa Bay Rays utility man Brandon Lowe went 0 for four with three strikeouts in a 3-1 win over the Houston Astros.

Trevor Story went 0 for four with two strikeouts in the Colorado Rockies' 7-3 loss to the Miami Marlins.

Rangers left fielder Joey Gallo smacked a three-run homer to put Texas up 8-6 on the Chicago Cubs, helping the team win their first game of the year.