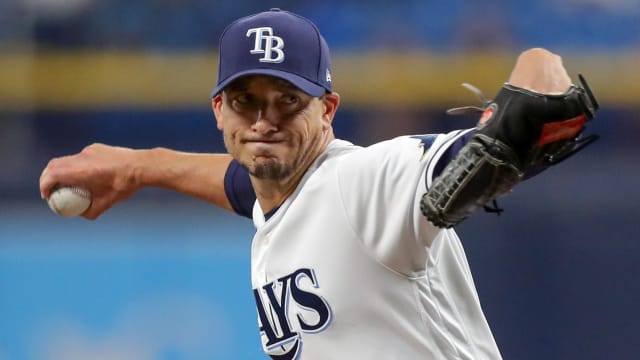 Charlie Morton helped the Tampa Bay Rays to a 4-2 win over former team the Houston Astros in MLB action on Friday.

In an emotional outing, Morton tossed five innings of two-run ball with eight strikeouts to see the Rays past the Astros.

The 35-year-old was the winning pitcher in game seven of the 2017 World Series that saw Houston win their first championship in franchise history.

Morton said before the game it would be hard not to be emotional facing his former team and he echoed those sentiments post-match.

"It's weird seeing those guys in the box, it is," he told reporters. "So, I don't think they're trying to take it easy on me I had to go out and try to make some pitches and get some outs."

Astros starter Gerrit Cole struck out 10 in six innings of work, but three unearned runs as part of a three-run third inning proved to be his downfall as Houston moved to 1-1 for the season.

Colorado Rockies starter German Marquez allowed just two hits and a run while striking out seven in a 6-1 win over the Miami Marlins.

Paul Goldschmidt is putting his name in the MVP hat early as he went four for five with three home runs and five RBIs in the St Louis Cardinals' 9-6 victory against the Milwaukee Brewers.

Desmond with the catch!

Rockies utilityman Ian Desmond made an amazing catch on a scorched fly ball off the bat of Marlins centerfielder Lewis Brinson.

Everything about this: Desi is ridiculous! pic.twitter.com/5Q83sFOj2V

It is the New York Mets' Noah Syndergaard against Stephen Strasburg of the Washington Nationals on Saturday. Do we need to build it up more than that?