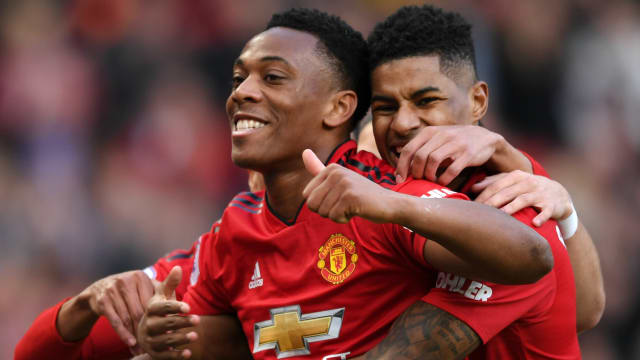 Goals in each half from Marcus Rashford and Anthony Martial got the Red Devils back to winning ways after losses to Arsenal and Wolves in the Premier League and FA Cup, despite Abdoulaye Doucoure's late strike.

It was a mostly uninspiring performance from United at Old Trafford, but the result moves them back into the top four at the end of a week in which Solskjaer was confirmed as their next full-time boss on a three-year deal.

Doucoure dragged a shot wide from inside the United box as the home side endured a strangely sluggish start in the Manchester sun, but they took the lead 28 minutes in, with Rashford clipping a clever finish over Ben Foster after Luke Shaw won back the ball on the edge of his own area and sent his England team-mate through on goal.

45 - Since his debut for Manchester United in February 2016, Marcus Rashford has scored 45 goals for the club in all competitions, more than any other player. Local. #MUNWAT pic.twitter.com/IDO8Xj6jCF

Foster made a smart save with his legs to deny Martial before half-time, as United began to dictate proceedings thanks largely to Solskjaer's decision to shift Juan Mata from the right wing into a number 10 role.

4 – This is the first time since the 1995-96 season (Scholes, Cole, Giggs, Cantona) that Man Utd have had four players score 10+ goals in a single Premier League campaign (Martial, Rashford, Lukaku, Pogba). Fab. pic.twitter.com/KhigG2k5l9

Watford were the better side after the break once more, though, with David de Gea saving well from Roberto Pereyra and Will Hughes curling a shot wide after Nemanja Matic lost the ball in his own area.

Martial struck 18 minutes from time, scooping the ball into the net after he reacted quickest following a tangle with goalkeeper Foster, and it proved just enough for the victory despite Doucoure slotting past De Gea after a clever link-up with Isaac Success and Troy Deeney.

What does it mean? United turn up pressure on Arsenal

Back-to-back losses to Arsenal in the league and Wolves in the FA Cup seemed to be on United's minds at times as they played largely risk-free football, but Solskjaer will be pleased enough to emerge from this game with three points.

The win lifts them back into fourth place in the table, a point above the Gunners, who play Newcastle United on Monday, and level with Tottenham in third.

Watford drop to ninth, but you sense their focus is already on next Sunday's cup semi-final with Wolves at Wembley.

Making his first league start since February 9, Phil Jones had an excellent game at the heart of United's defence. The fact he was so involved in the match reflects how generally poor his side were further forward.

Nobody in the United midfield stood out, but Paul Pogba was particularly anonymous. He offered little to link with the attack and rarely tracked the forward runs of Hughes.