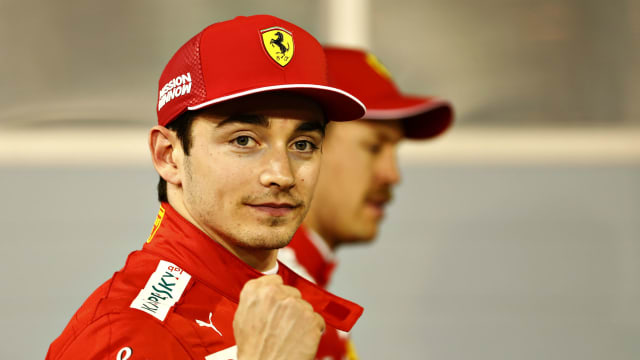 Charles Leclerc stormed to the first pole position of his Formula One career by smashing the track record as Ferrari locked out the front row at the Bahrain Grand Prix.

The Scuderia endured a disappointing start to the season in Melbourne, but have dominated in Sakhir so far this week and continued to impress in Saturday's qualifying.

The 21-year-old, fifth on his Ferrari debut at Albert Park, nipped in with a record time of 1:27.866 - with Vettel 0.294secs slower in his only lap of Q3, having had to use an extra set of tyres following a mistake in Q2.

And it’s pole position for #Charles16 in the #BahrainGP. Great! #SF90#essereFerraripic.twitter.com/2cd41CjoSx

Hamilton was 0.324s off the pace, with Bottas only just missing out on third place after winning the Australian Grand Prix as the Silver Arrow will have to come from the second row to deny Ferrari victory, despite closing the gap to their rivals from free practice.

Max Verstappen will start in fifth place, while Red Bull colleague Pierre Gasly could only qualify in 13th after dropping out of Q2. Haas' Kevin Magnussen will join Verstappen on the third row.

Daniel Ricciardo also failed to make it through to Q3 and will be 11th on the grid.

LECLERC: "I'm extremely happy. Seb is an amazing driver, but today I'm very happy to be on pole" #BahrainGP#F1pic.twitter.com/yxVjz8u2ab

Leclerc, quickest in all three qualifying sessions, said over the team radio: "Tomorrow is the race where we score points but today is a good beginning. I will try to finish the job."