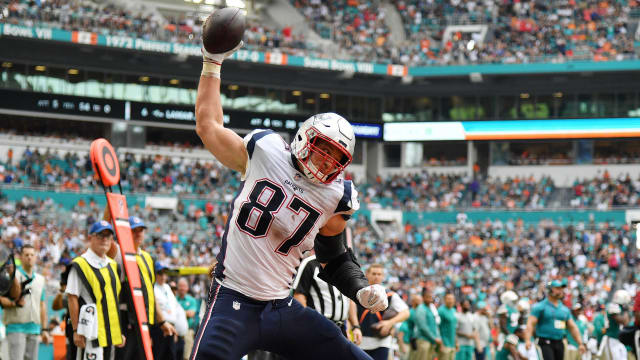 Gronkowski's future is not in the NFL after announcing his retirement, having led the New England Patriots to Super Bowl victory last season.

The 29-year-old and three-time Super Bowl champion spend nine seasons in the league and is regarded as one of the greatest tight ends in NFL history.

Ojinnaka – a former Patriot and team-mate of Gronkowski in 2010 whose ring name is Moose – made the transition from the NFL to the WWE and could see the New England star doing the same.

"I think Gronk's going to sign with WWE, but he's not going to make it his next career," Ojinnaka said, via Sports Illustrated. "He can have a big match at WrestleMania or SummerSlam, but I know Gronk.

"People need to understand that his body has been through hell. Gronk can't make this a career, but he can have a couple great matches."

Gronkowski has suffered a sprained ankle, a broken left forearm, ongoing back issues, a torn anterior cruciate ligament and medial collateral ligament, a knee sprain, hamstring injury and more throughout his time in the NFL.

"If Gronk were healthy, he would have made a perfect wrestler," Ojinnaka added. "He's athletic, has size, and he is so charismatic. But his body has been through way too much."

Ojinnaka started training for a professional wrestling career in 2012 and made his debut in 2014.

He went as far as comparing the two head honchos alluding to the fact if Gronkowski can play under head coach Bill Belichick, he can play — or in this case perform — for anyone.

"Bill Belichick is the equivalent of 10 Vince McMahons mixed into one," said Ojinnaka. "There is no one else like Belichick."

Gronkowski tallied 521 catches, 7,861 yards and 79 touchdowns in 115 career regular-season games. He exited as the Patriots' career leader in touchdowns and is tied for the second-most receiving scores in postseason history (12).

He also earned five Pro Bowl selections, four first-team All-Pro honours and the award for the 2014 NFL Comeback Player of the Year. And in the postseason, he had few peers. Gronkowski retired as the NFL's postseason leader among tight ends in catches (81), receiving yards (1,163) and receiving touchdowns (12). Only Jerry Rice has more touchdown catches in the playoffs than Gronkowski.