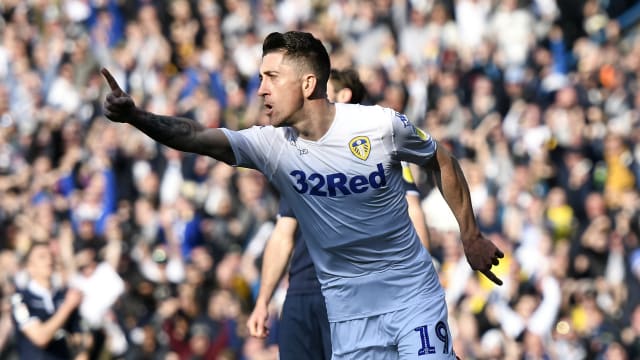 Leeds United moved up to second place in the Championship table by capitalising on Sheffield United's slip-up at home to Bristol City.

With leaders Norwich City in action away to Middlesbrough later on Saturday, there was a chance for the Yorkshire rivals to stake their promotion claims.

Derby County thrashed Rotherham United 6-1 to climb into the play-off places while there was a big win at the other end of the table for Bolton Wanderers.

Here are your full-time scores in the #SkyBetChampionship!#EFLpic.twitter.com/lqSZgZ94v7

Leeds supporters were put through a heart-stopping match as Marcelo Bielsa's side twice came from behind to beat Millwall 3-2 and leapfrog Sheffield United in the process.

The hosts looked as panicky as the crowd when Ben Thompson headed Millwall in front after 10 minutes and their nerves were not helped when Patrick Bamford had a penalty saved by David Martin in the 19th minute.

Leeds came to life just after the half-hour mark when Hernandez finished a sweeping passing move with a neat finish, but Liam Cooper brought down Ben Marshall 10 minutes into the second half and the Lions winger converted the ensuing penalty himself.

Substitute Barry Douglas crossed for Luke Ayling to pop up with a superb headed goal and Bielsa's commitment to attacking football paid off as his side poured forward in search of a winner that arrived, Tyler Roberts cutting the ball back for Hernandez to hammer home.

Chris Wilder's men had won eight in a row at home in the league, not even conceding in front of their own fans in 2019, so few would have expected Bristol City to take the points at Bramall Lane.

Billy Sharp's 23rd Championship goal of the season put Sheffield United in front in the sixth minute and Scott Hogan also scored for the hosts, though Weimann twice equalised to bring his side level.

And the former Aston Villa forward completed his treble in the 83rd minute to end a five-game winless run in the league for Lee Johnson's men, who move up to eighth place with their play-off hopes revived.

WE LOVE THIS GAME. #SHUvBRC#BristolCitypic.twitter.com/BSfjzzJKJI

Aston Villa's 2-1 triumph at home to Blackburn Rovers, their fifth Championship win in a row, leaves Dean Smith's team fifth. Derby are just behind after Martyn Waghorn's hat-trick helped thrash Rotherham, although Middlesbrough can move back into the top six by avoiding defeat against Norwich.

Nottingham Forest's 2-1 win against Swansea City, a comeback victory at the City Ground secured thanks to late Daryl Murphy and Molla Wague goals, also keeps Martin O'Neill's men in the hunt for a play-off place but Sheffield Wednesday's top-six charge was dented by a 0-0 draw at Stoke City.

Off the field issues continue to make the headlines for Bolton Wanderers, but Phil Parkinson's side moved within five points of safety with a 2-1 victory at Queens Park Rangers.

Goals from Will Buckley and Callum Connolly set up their second win in four Championship games, although a late reply from Nahki Wells made for a nervy finish at Loftus Road.

It's a superb away victory here at Loftus Road for Phil Parkinson's men. An excellent performance and three well deserved points. Get in there! #BWFC  pic.twitter.com/FnqLVLRFuq

QPR are now winless in five Championship games and pressure is growing on former England manager Steve McClaren, while Reading are four points clear of the drop zone after a 2-1 triumph over Preston North End.

Wigan Athletic also edged up to 40 points by virtue of a goalless draw at home to Brentford, but Ipswich Town's fate is close to being sealed with a 2-0 home loss to Hull City leaving the Tractor Boys 13 points adrift with only seven games to play.