Aguero taken off as a precaution, says Guardiola 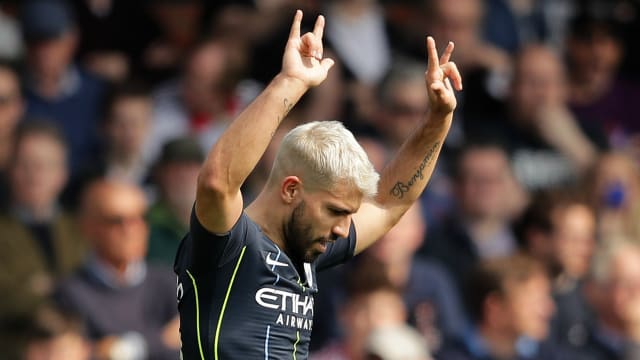 Sergio Aguero "felt something" before he was substituted during the second half of Manchester City’s 2-0 win at Fulham, but Pep Guardiola is hopeful his first-choice striker is not injured.

The Argentine provided the assist for Bernardo Silva’s fifth-minute opener at Craven Cottage before scoring his 19th Premier League goal of the season just before the half-hour mark.

With City firmly in control, Aguero was replaced by Gabriel Jesus after 57 minutes and Guardiola confirmed the switch was made only as a precaution.

"Tomorrow we have the real assessment," Guardiola told reporters.

"He [Aguero] says he felt something but he is not injured. As a precaution he decided not to continue.

PEP "The performance in the first 20 minutes was maybe the best of the season. After we scored, we controlled and limited the number of chances @FulhamFC had, especially in the first half.

"We did what we had to do and we're happy for these three points." #FULMCI #mancity pic.twitter.com/dCCUtzjrX1

The City boss went on to heap praise on his side's performance in an opening spell that might have yielded more than just two goals.

The victory put City back on top of the Premier League table ahead of Liverpool's clash with Tottenham on Sunday, and Guardiola was impressed by the way his charges responded after a two-week international break.

"The performance in the first 20 minutes was maybe the best of the season," said Guardiola.

"It was a tricky game, a 12:30 kick-off after the international break, but the way we started was amazing. They showed me the focus.

"After we scored, we controlled and limited the number of chances Fulham had, especially in the first half. We did what we had to do and we're happy for these three points.

"It's an incredible result after the international break. The players reacted really well."

City face Cardiff City at Etihad Stadium on Wednesday and Guardiola insisted his players were focused on winning all of their seven remaining league games as they aim to retain the Premier League title, saying they would "enjoy the momentum, keep going and dream to win."