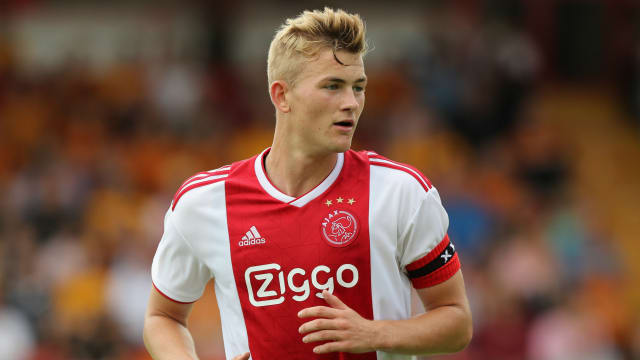 Solskjaer was rewarded with a three-year deal on Thursday after impressing United during his caretaker period, having replaced Jose Mourinho in December.

With Solskjaer's future sorted, talk has now turned to transfers and United's plans for the 2019-20 season, with the likes of Borussia Dortmund sensation Jadon Sancho, Real Madrid defender Raphael Varane and West Ham midfielder Declan Rice among those linked.

Defence appears to be an area of concern – dating back to the start of the season as former boss Mourinho tried to sign Leicester City's Harry Maguire and Tottenham's Toby Alderweireld – and Berbatov talked up the prospect of Ajax captain and Barcelona target De Ligt.

Ole Gunnar Solskjaer said Manchester United will do business in the transfer market.#MUFCpic.twitter.com/oECRLpiE8X

"United have spent a lot of money in recent seasons, so they need to make sure they don't spend for spending's sake; they need to think carefully about what they need and choose wisely," Berbatov told Betfair.

"In attack, with [Marcus] Rashford, [Anthony] Martial, [Romelu] Lukaku and [Jesse] Lingard, they have everything they need, but I think they need to focus on two areas; central defence and a central midfielder who can free up Paul Pogba to play in attacking areas.

"We've seen lots of names mentioned as a potential defender signing, with Maguire and Alderweireld consistently linked, and I like them both - they're solid and comfortable bringing the ball out of defence.

"One player I would love to see at Old Trafford is Ajax defender Matthijs de Ligt, although I know every big club in Europe is after him. I watched him play against Real Madrid and he looks the real deal - so confident and assured for a player of his age.

"Having his international team-mate Virgil van Dijk already in the Premier League could be a boost for any English team chasing De Ligt. The Liverpool man will be telling him how good the league is and that can make a real difference to where you choose to go."

United are fifth in the Premier League – two points adrift of fourth-placed Arsenal with eight games remaining, while they are also preparing for a Champions League quarter-final against Barcelona next month.

On Solskjaer's permanent position, Berbatov added: "Getting the job is a brilliant first step, but in many ways the difficult work starts now. The pressure is going to be huge - Ole will now be fighting to keep the job, rather than get it.

"I've heard the argument that United were holding off appointing Solskjaer full-time to keep the players hungry, but there is no way they will take their foot off the pedal - these are top professionals and they have loads to play for.

"The aim this season will be to get in that top four - and as far as they can in the Champions League of course - but come next season they need to be targeting the title. This is Manchester United we are talking about! Ole has had the chance to look at the team this season and he absolutely needs to be fighting for all the big prizes next season."