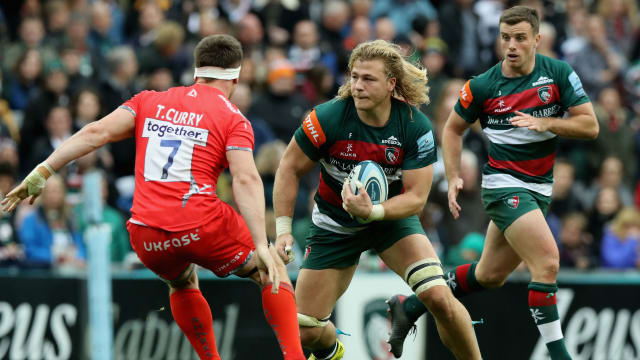 Relegation-threatened Leicester Tigers will be without David Denton for the rest of the Premiership season due to concussion.

The Scotland back-row has still not recovered from a head injury he suffered in October.

Denton will play no further part in the Tigers' battle to avoid the drop, with the club only five points off the bottom.

The 29-year-old said: "I would obviously rather be out there with the lads at the moment, it has been a difficult season and one I wish I could have played a bigger role in alongside the rest of the squad.

"It has been a frustrating period for me on the sidelines but this decision allows me some clarity, which is nice, and I can aim towards getting back to full fitness to make a big impact next season.

"Concussion is a serious thing and I'm very appreciative to the medical staff at the club and experts I've consulted for their care and understanding throughout the season."

Tigers head coach Geordan Murphy said: "It's not ideal and we've missed Dave in the pack after he had a strong start to his time at the club at the beginning of this season, but his health is paramount and we're not in the business of risking players' well-being.

"Ultimately, the decision was taken out of his hands by experts and he's disappointed to not be out there with the lads but understands the importance of the situation and his long-term health.

"He will continue to work with our medical staff, alongside strength and conditioning coaches, towards a return for next season for the club."