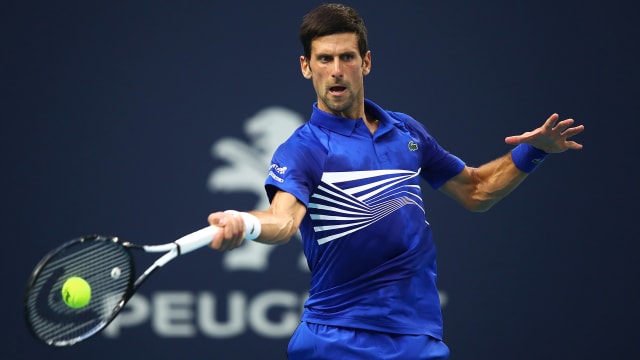 World number one Novak Djokovic was stunned at the Miami Open, while rain forced Roger Federer to wait.

Djokovic suffered a second loss to Roberto Bautista Agut this year to make a fourth-round exit at the ATP 1000 event.

Federer was due to face Daniil Medvedev, but rain saw their encounter pushed back to Wednesday.

Djokovic was in irresistible form on the way to the Australian Open title, but the Serbian has suffered early exits at Indian Wells and Miami.

Bautista Agut came from a set and a break down to upset Djokovic 1-6 7-5 6-3, adding to his victory over the 15-time grand slam champion in Doha.

"I just had way too many things off the court. I guess that affected me a little bit on the court," Djokovic said after his loss.

"I didn't feel my best health-wise, as well, in Indian Wells and here. Still rusty, but, hey, look, you learn that's life."

A day to remember for @BautistaAgut

This lob was on point

Awaiting Bautista Agut in the quarter-finals is Isner, who is yet to drop a set at this year's tournament.

Kyrgios produced an incredible tweener during a 4-6 6-3 6-2 loss to Croatian 11th seed Coric.

The Australian 27th seed smashed two racquets during his defeat, which came after just under two hours on court.

Coric will meet Felix Auger-Aliassime after the Canadian teenager continued his run by beating Nikoloz Basilashvili 7-6 (7-4) 6-4.

The other quarter-final will be between Frances Tiafoe and Denis Shapovalov after their wins over David Goffin and Stefanos Tsitsipas respectively.