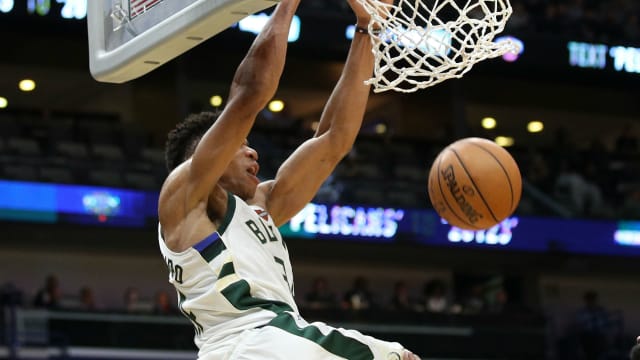 The Milwaukee Bucks beat the Houston Rockets, while the Los Angeles Clippers secured a postseason berth in the NBA.

MVP contender Antetokounmpo scored 19 points and racked up 14 rebounds in his team's win. Eric Bledsoe recorded a team-high 23 points, though.

Harden – the reigning MVP – had an off night, scoring 23 points on just nine-of-26 shooting.

Meanwhile, the Clippers clinched a playoff spot with a 122-111 win over the Minnesota Timberwolves.

The Clippers' Danilo Gallinari led all scorers with 25 points, which helped his team fight off solid scoring performances from Karl-Anthony Towns (24) and Andrew Wiggins (22).

Time is winding down. The Utah Jazz, Oklahoma City Thunder, San Antonio Spurs and Sacramento Kings are still looking to punch their tickets to the playoffs in the Western Conference.

Kemba Walker's 38 points, nine rebounds and 11 assists powered the Charlotte Hornets to a 125-116 overtime victory against the San Antonio Spurs.

Jamal Murray scored a game-high 33 points in the Denver Nuggets' 95-92 win over the Detroit Pistons.

Bradley Beal poured in 32 points as the Washington Wizards fell to the Los Angeles Lakers 124-106.

Kelly Olynyk only managed four points on one-of-seven shooting in the Miami Heat's 104-99 loss to the Orlando Magic.

Lance making them dance is our @budweiserusa Moment of the Week pic.twitter.com/kr5tgZt3kf

Dwight Powell reached back to finish this alley-oop in the Dallas Mavericks' 125-121 loss to the Sacramento Kings.

The fourth-seeded Indiana Pacers have already clinched a playoff berth in the Eastern Conference. The Thunder, however, have not accomplished this yet. Oklahoma City are seventh in the Western Conference and will face a cold Pacers team who have lost four of their last five games.