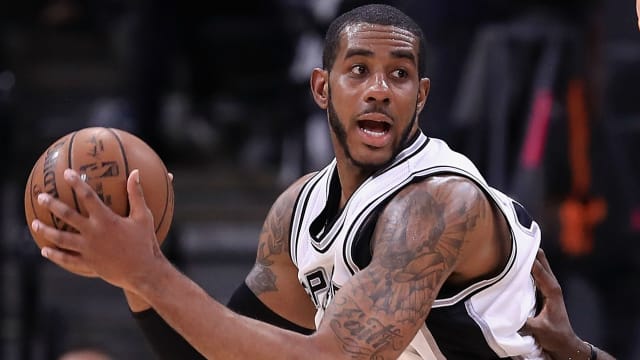 San Antonio Spurs star LaMarcus Aldridge exploded against the Boston Celtics in the NBA on Sunday.

The Spurs big man totalled 48 points, 13 rebounds and six assists in San Antonio's 115-96 win. He showcased his signature mid-range game along the way.

San Antonio have now won 10 of their last 12 games. The Spurs are eighth in the Western Conference, but are just a half game behind the Oklahoma City Thunder and Utah Jazz and only one game behind the fifth-placed Los Angeles Clippers so they have a great chance to move up the standings.

Boston, who have lost four straight games, are fifth in the Eastern Conference.

The Celtics had a cold outing offensively, as Marcus Smart led the team with 14 points.

LaMarcus picking up where he left off as the third quarter gets underway!#GoSpursGopic.twitter.com/Dd61VxBEX7

Bojan Bogdanovic scored a game-high 35 points in the Indiana Pacers' 124-88 win over the Denver Nuggets.

James Harden's 28 points led the Houston Rockets to a 113-90 victory against the New Orleans Pelicans.

Malik Monk scored three points on one-of-five shooting in the Charlotte Hornets' 115-114 win over the Raptors in Toronto.

Jeremy Lamb knocked down a ridiculous half-court buzzer-beater to seal the deal for Charlotte.

JEREMY LAMB WITH THE HALF-COURT BUZZER BEATER TO WIN. THE. GAME!!!!! #hornets30@TISSOTpic.twitter.com/VOUnXMhZCv

Giannis Antetokounmpo eluded Larry Nance Jr. with a spin move and finished with authority in the Milwaukee Bucks' 127-105 thrashing of the Cleveland Cavaliers.

Giannis spinning and slamming for the @Bucks! #PhantomCam#FearTheDeerpic.twitter.com/MvQfiaJepX

This matchup features two All-Star point guards in D'Angelo Russell and Damian Lillard. Brooklyn and Portland are both in the playoff picture. Each team have dangerous backcourts that can fill it up in a hurry.