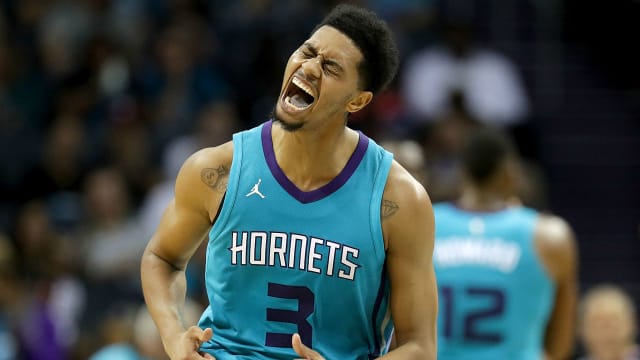 If the Charlotte Hornets end up making the playoffs, Jeremy Lamb deserves a special bonus.

Lamb hit an incredible shot from beyond half-court at the buzzer to help Charlotte top the Raptors 115-114 in Toronto on Sunday.

Lamb took an inbounds pass with 3.1 seconds remaining, but lost the handle. He chased the ball down five feet into the backcourt, turned and fired.

The ball banked in for the improbable game-winner that stunned Raptors fans and sent the Hornets swarming Lamb. He finished with 13 points off the bench.

JEREMY LAMB WITH THE HALF-COURT BUZZER BEATER TO WIN. THE. GAME!!!!! #hornets30@TISSOTpic.twitter.com/VOUnXMhZCv

According to ESPN, Lamb hit the shot from 48 feet, making it the second-longest game-winning shot in 20 years. Tyreke Evans hit a 49-foot shot for the Sacramento Kings against the Memphis Grizzlies on December 29, 2010.

The Hornets (34-39) have won three straight and are now – thanks to Lamb – within two games of the eighth-placed Miami Heat in the Eastern Conference playoff race.