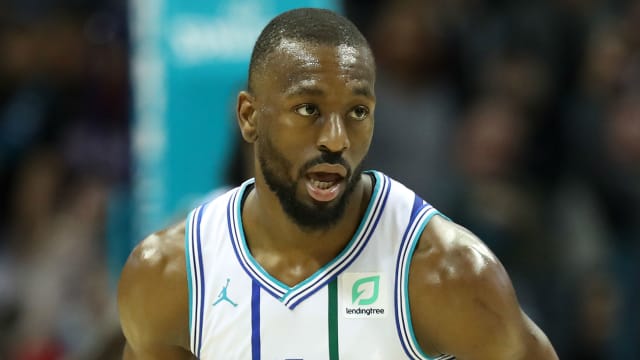 The Hornets shocked the Boston Celtics in the NBA on Saturday, overcoming an 18-point deficit in the final eight minutes to claim a 124-117 victory in Charlotte.

Boston entered the game having lost two straight, and the Hornets extended their recent slide.

He even shared the ball with style, rewarding Miles Bridges' defensive efforts by throwing him a lob on the break.

SWAT → LOB → JAM! WHAT A SEQUENCE BY @MilesBridges AND @KembaWalker#hornets30@HornetsOnFSSEpic.twitter.com/LETz3vp6CD

Kyrie Irving had a respectable night in his own right for Boston. The point guard tallied 31 points, seven rebounds and six assists.

The Hornets are just 2.5 games back from the final playoff spot in the Eastern Conference. The Celtics are firmly in fifth place.

Charlotte will need to string together a few more signature wins to get into the postseason.

Karl-Anthony Towns racked up 33 points and 23 rebounds in the Minnesota Timberwolves' 112-99 victory over the Memphis Grizzlies.

Trae Young poured in 32 points and 11 assists as his Atlanta Hawks topped the Philadelphia 76ers 129-127.

Rudy Gobert had 21 points and 14 rebounds in the Utah Jazz's 114-83 trouncing of the Chicago Bulls.

slow motion for you.

ice in his veins. pic.twitter.com/DWUuO3Zpjl

DeMarcus Cousins showcased his handles and blew by Dallas' Luke Doncic for a slam in the Golden State Warriors' loss to the Dallas Mavericks.

San Antonio were just one of the hottest teams in the NBA, but they have lost their last two games. Boston are still struggling to find consistency, as they enter Sunday having lost three straight. Both squads have All-Star calibre talent and are looking to get back on track.