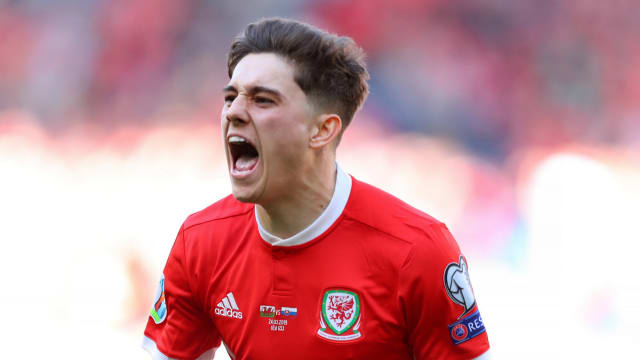 Wales got their bid to qualify for Euro 2020 off to a winning start after Swansea City winger Daniel James scored the only goal in a 1-0 victory over Slovakia at Cardiff City Stadium.

The 21-year-old struck after five minutes and Ryan Giggs' men rarely looked like losing against opponents they are expected to be vying with for a qualification spot from Group E.

Croatia are tipped to top the group but after a performance in which the talents of James, David Brooks and Harry Wilson caught the eye more than those of Gareth Bale, Wales have every reason to look forward to a successful campaign.

Wales coped admirably without the injured Aaron Ramsey as Giggs' well-drilled midfield kept the dangerous Marek Hamsik quiet to ensure they picked up all three points.

The hosts took the lead when a burst of pace from Brooks put Slovakia on the back foot before James dispossessed Peter Pekarik on the edge of the box and rifled home with a powerful right-footed finish.

Giggs' men did not let Slovakia settle, hassling and harrying them for possession and dominating the early exchanges, Brooks sending a first-time effort wide from 12 yards as they probed for a second.

When the visitors did enjoy spells of possession, they came up against a packed Welsh defence. Brooks almost poached a goal on the counter-attack before the break, curling a shot narrowly wide from the corner of the penalty area.

Slovakia went close through Albert Rusnak as Wales were tested early in the second half, the winger heading wide from six yards out, but James' pace was always a threat at the other end.

The Swansea man pulled Slovakia's defence apart only for Brooks to drag his attempt wide, but Slovakia goalkeeper Martin Dubravka was required to make a diving save to keep Wilson's angled drive out with 17 minutes left.

There was a panicky moment for Wayne Hennessey when Rusnak's cross was headed goalwards from close range by substitute Michal Duris but the Crystal Palace keeper showed quick reactions, saving above his head to the relief of the home crowd.

2006 - The only previous time Wales hosted Slovakia in a competitive match, Gareth Bale scored his first ever goal for the Dragons (1-5 defeat in October 2006). Throwback. #WALSVKpic.twitter.com/0nrztjTDkP

What does it mean?

Wales have now won three of their five competitive matches under Giggs and all of their last three opening matches in major qualifying campaigns.

James possesses the wonderful combination of speed, close control and good finishing technique. On a day when Bale was a closely marked man, the Swansea forward provided a constant attacking threat.

Hamsik short of his best

After moving to Chinese club Dalian Yifang in February, the usually inspirational Hamsik looked off the pace. The playmaker lacked poise and presence in Slovakia's midfield.

- Slovakia are winless in their last seven away games in all competitions (D1 L6) since a 2-1 win in Lithuania in June 2017.
- Wales have won consecutive matches in all competitions for the first time since a run of three in October 2017 under Chris Coleman.
- Daniel James scored just five minutes into his competitive debut for Wales, their earliest goal in a competitive fixture since March 2007 (Ryan Giggs v San Marino - three minutes).
- Gareth Bale had six shots in this game – his most without finding the net in a home match for Wales since October 2014 (10 v Cyprus).
- Ashley Williams made his 85th appearance for Wales – only Chris Gunter (94) and Neville Southall (92) have played more games for the Dragons.

Wales face Group E favourites Croatia on June 8 while Slovakia head to Azerbaijan three days later for a game they will feel is a must-win encounter.