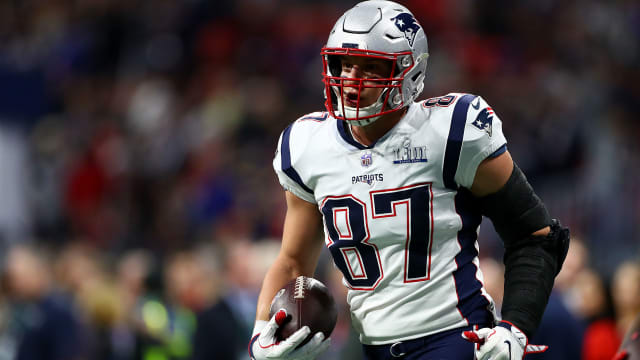 Rob Gronkowski will not be back in a New England Patriots uniform in 2019.

The 29-year-old tight end announced his retirement on Instagram on Sunday. He spent all nine of his NFL seasons in New England.

"It's time to move forward and move forward with a big smile on my face knowing that the New England Patriots organisation, Pats nation and all my fans will truly be a big part of my heart for the rest of my life," Gronkowski wrote.

"It was truly an incredible honour to play for such a great, established organisation.”

"It was a pleasure and a privilege to coach Rob Gronkowski the past nine years," Belichick said in a statement. "From his rookie year until his final season and through countless times in between, Rob was a major reason why we won games and championships.

"Rob's impact on our team and organisation was felt in many ways … Rob will leave an indelible mark on the Patriots organisation and the game as among the best, most complete players at his position to ever play."

Gronkowski, who struggled with injuries throughout his career, won three Super Bowls and made five Pro Bowls during his time with New England.

Here are five facts about the tight end’s stellar career, thanks to Opta.

– The tight end tallied four seasons with 1,000 or more receiving yards. That is tied for the most ever by a player at his position.

– The former Arizona star leads all tight ends in postseason catches (81), receiving yards (1,163) and receiving scores (12). Jerry Rice is the only player who has caught more touchdowns in the playoffs.

– Gronkowski and Rice are the only two pass catchers in history to register 20 or more receptions, 200 or more receiving yards and three or more touchdowns in the Super Bowl.

– In 2011, Gronkowski pulled in 17 touchdowns, the most ever by a tight end. Only four players have ever had more receiving scores in a single season.

– Since he entered the NFL in 2010, Gronkowski has registered seven games with multiple touchdowns and 100 or more receiving yards. Only four wideouts have recorded more: Antonio Brown, Jordy Nelson, Calvin Johnson and Julio Jones.