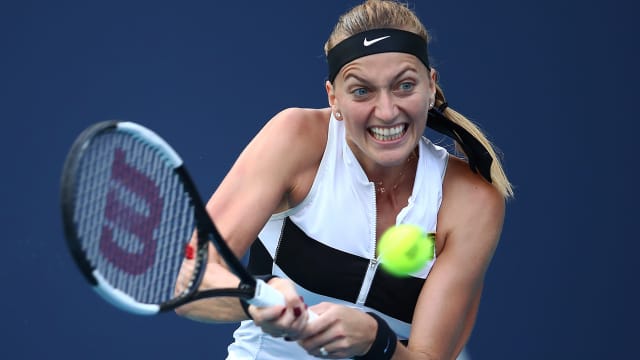 Petra Kvitova and Caroline Wozniacki moved into the last 16 of the Miami Open as world number one Naomi Osaka was stunned on Saturday.

Kvitova was tested before getting past Donna Vekic, while 2017 runner-up Wozniacki was also challenged in the third round.

It was a good day for the seeds at the WTA Premier event, but not so for Japanese star Osaka.

KVITOVA, WOZNIACKI GET THROUGH

Kvitova survived a huge test against Vekic, progressing thanks to a 6-4 3-6 6-4 victory.

The Czech third seed lost to Croatian Vekic when they met in St Petersburg earlier this year, but a single break in the final set proved decisive.

Wozniacki is well-placed for another deep run after overcoming qualifier Monica Niculescu 6-4 7-6 (7-4).

With Osaka's shock loss, the top half of the draw has opened up for Wozniacki.

The 21-year-old Osaka was up a set and a break, only to give up her advantage before losing four straight points in the second-set tie-break.

Osaka took a 2-0 lead in the decider, but lost four straight games from 3-2 up to make an early exit.

Hsieh Su-Wei continues to slay at the @MiamiOpen

The Canadian teenager extended her winning streak by beating Angelique Kerber 6-4 4-6 6-1 for her 10th straight victory in what was a repeat of the Indian Wells final.

Anett Kontaveit, Caroline Garcia, Ashleigh Barty and Kiki Bertens were also among the winners on Saturday.