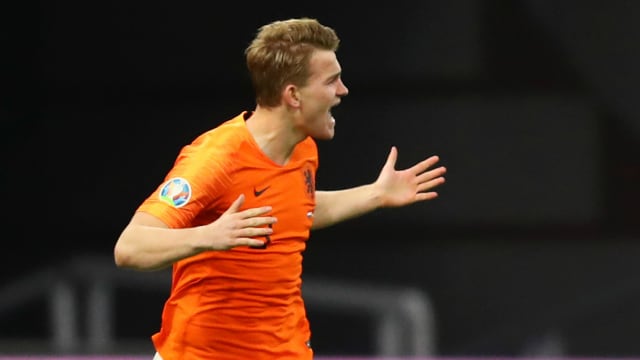 Matthijs de Ligt felt Netherlands were scared to attack Germany in the first half of their Euro 2020 qualifying defeat in Amsterdam.

Serge Gnabry and Leroy Sane scored fantastic goals to put Joachim Low's side 2-0 up at the break in Group C on Sunday.

But Germany, who were beaten 3-0 by Netherlands in the Nations League last year, snatched the points in the last minute when Nico Schulz struck.

Koeman made changes at half-time to get his side back in the game and Ajax captain De Ligt accepted Netherlands were too passive in the opening period.

"The first half wasn't good," the teenage centre-back told NOS. "We didn't put on the pressure and they had a lot of space.

"Maybe we were somehow scared to attack Germany. In the second half we showed we're a good team, but that was too late.

"It's the Dutch mentality to try to score a third goal. You could keep pressing or defend and we did the first thing, but you should remain focused and we lacked in the end."

23 - @DFB_Team_EN wins for the first time in 23 years in the Netherlands. Prestige. #NEDGERpic.twitter.com/YOGe2q5X5q

Virgil van Dijk agreed with De Ligt's assessment, both centre-backs having appeared unsettled by Low's use of a formation that included no strikers but saw Sane and Gnabry roam off the flanks.

"We knew we have a long way to go and tonight proved that," the Liverpool defender told NOS.  "We came back so well and then you should grab a point at least. Too bad it didn't work out that way.

"We had difficulties in the first half. They had a lot of movement and we weren't organised well. We improved a lot in the second half when Frenkie de Jong played more from midfield."