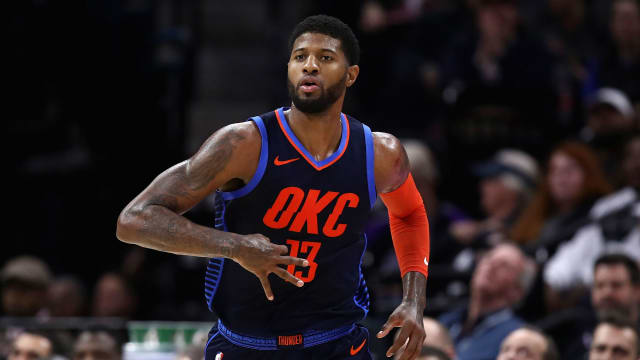 The Oklahoma City Thunder kept pace with the Los Angeles Clippers after a huge win over the Toronto Raptors in the NBA on Friday.

The Thunder can feel the Clippers breathing down their neck in the Western Conference playoff race, but they got past the Raptors 116-109.

Oklahoma City were able to overcome a 37-point effort from Kawhi Leonard to remain in the fifth playoff spot in the West and in a tie with the Clippers (43-30) as Los Angeles have won nine of their last 10 games.

The Clippers got a scare of their own when they had to fend off a pesky Cleveland Cavaliers team in a 110-108 victory on the road.

Danilo Gallinari scored a game-high 27 points on 11-of-15 shooting as Los Angeles stopped a fourth-quarter comeback from the Cavs. Cleveland nearly erased a nine-point deficit in the fourth quarter when they cut the lead to one with 10.7 seconds left.

Fortunately for the Clippers, Jordan Clarkson missed a jumper at the buzzer to give Los Angeles the win.

Meanwhile, the Lakers are out of playoff contention after a 111-106 loss to the Brooklyn Nets.

Lakers keep it close but can't pull it out down the stretch, falling to the Nets, 106-111. pic.twitter.com/LKTfNBW68o

Harden the hero for Rockets

James Harden scored a career-high 61 points in the Rockets' 111-105 win over the San Antonio Spurs. He now holds all five of Houston's best single-game scoring performances.

Grizzlies center Jonas Valanciunas scored 23 points on 10-of-19 shooting and added 24 rebounds in Memphis' 123-119 overtime loss to the Magic. Terrence Ross scored a game-high 31 in the win for Orlando.

This was not Goran Dragic's game. The 32-year-old point guard went 0-for-nine shooting in the Miami Heat's 116-87 loss to the Milwaukee Bucks.

The Denver Nuggets always make passing by big men look easy and they did it again in their 111-93 win over the New York Knicks when Mason Plumlee found Nikola Jokic off the rebound.

Mase with the hustle & find!#MileHighBasketballpic.twitter.com/NvSVMrZcA3

With 11 games to play, the Detroit Pistons have a seemingly safe 3.5-game cushion on the ninth-placed Magic for the final playoff spot, but crazier things have happened. Portland, meanwhile, trail the third-placed Rockets in the Western Conference by only a half-game.