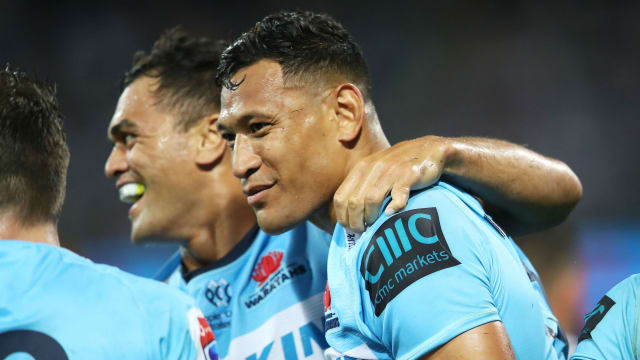 Folau touched down after the Crusaders failed to deal with a cross-field kick into the in-goal area to move level with Doug Howlett on 59 tries in Saturday's contest at the Sydney Cricket Ground.

His score six minutes from time effectively ended the Crusaders' hopes of extending their record run of wins and handed them a first defeat since March last year, tries from Jed Holloway and Cameron Clark having put the Waratahs in command.

‎Scott Robertson's Crusaders were playing in their first game since last week's mass shooting in their home city of Christchurch. A minute's silence was held before kick-off with players from both teams linking arms in a circle.

On an emotional day, the visitors did score a late try through Will Jordan, only to miss out on a bonus point as the subsequent conversion attempt went wide.

The Waratahs top the Australian Conference with three wins from five, while the Crusaders are only above the Hurricanes in the New Zealand Conference on points difference.

It’s been a bruising encounter against the @nswwaratahs with the home side winning 20-12. Well played Tahs - and thank you to you and your fans for showing support for our city #WARvCRU Copyright @photosportnz

Beauden Barrett was the hero for the Hurricanes as they moved on to an identical record to the Crusaders with a 34-28 victory over the Stormers.

The Stormers led 21-15 at the break thanks to tries from Siya Kolisi and Bongi Mbonambi and three SP Marais penalties, Ben May and Jordie Barrett crossing for the Hurricanes.

And the South African side appeared poised to come away with the victory as Jaco Coetzee's try kept their noses in front despite Wes Goosen's 10-minute double.

Barrett had other ideas, though, and squeaked his way over 10 minutes from time, also converting his effort as the Hurricanes prevailed.

Elsewhere, the Sunwolves' first game since learning they will be axed from the competition at the end of the 2020 season ended in defeat to the Lions, who go top of the South Africa Conference.

A pair of Malcolm Marx tries gave the Lions a 12-7 half-time lead, and they scored 25 points after the interval to cruise to a 37-24 victory in Tokyo. It is now five defeats from six for the Sunwolves, while the Lions have four wins to their name.