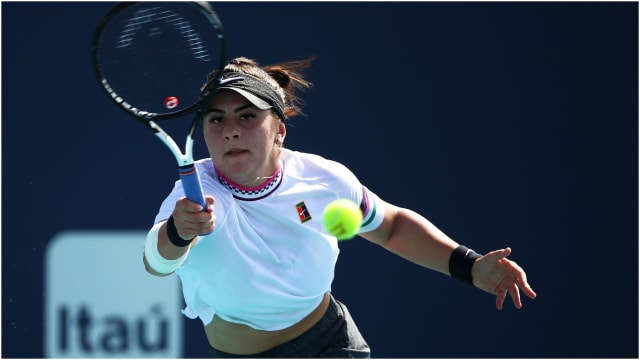 Indian Wells champion Bianca Andreescu continued her sensational run of form with a 6-3 6-3 defeat of Sofia Kenin at the Miami Open on Friday.

Kenin was the last player to defeat Andreescu in Acapulco, but evidence of the teenager's swift progress was clear as she cast aside the seeded American in the second round.

There were setbacks in the first set as Kenin threatened to again establish a hold over one of the WTA Tour's form players, yet Andreescu's riposte was superb.

A confident second set saw the 18-year-old extend her winning run to nine matches, with Angelique Kerber - beaten in the final at Indian Wells - potentially next up.

Unfortunate way for Kenin to end the match - @BAndreescu_ through in straight sets, 6-3, 6-3!

It's the Canadian's 30th win so far this season!#miamiopenpic.twitter.com/h34lTGRjFn

Andreescu came through a testing first game but bowed to the pressure when she served again, going long on break point as an accomplished early Kenin showing was rewarded.

The power of Andreescu's return saw an immediate response and the breaks kept coming in an entertaining contest, but the Canadian found her composure when serving out the opener.

There was no let up in Andreescu's play, although the second set threatened to go the same way as both players struggled on serve.

As in the first, though, the in-form star came out on top and took the third of three match points when Kenin double-faulted.