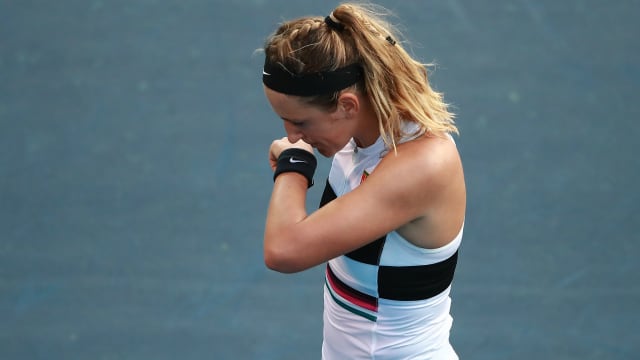 Former world number one Victoria Azarenka was a second-round casualty at the Miami Open, where Bianca Andreescu emerged from the jaws of defeat to advance.

Australian Open runner-up Petra Kvitova and Venus Williams also moved through to the next round of the WTA Premier Mandatory event.

Two-time grand slam champion Azarenka was beaten 6-3 6-4 by Garcia, who reached the third round in Miami for the third time.

Garcia was comfortable throughout, requiring 96 minutes to oust the world number 46 thanks to 15 winners and as many unforced errors.

Come On ! Great fight tonight, through to the 3rd round in @MiamiOpen
Allez ! Sacre bataille ce soir, au 3e tour a #MiamiOpen#FlyWithCaro@EastMiami#teameastpic.twitter.com/iYVMH7GMUg

"Maybe she's not playing as she was when she was number one, but she's a great player. I saw the match when she played against Serena [Williams] in Indian Wells, it was a very impressive match from both of them," said Garcia, who will play 15th seed Julia Goerges after the German defeated Magdalena Rybarikova.

Canadian teenager Andreescu was heading for an early exit before completing a memorable 4-6 7-6 (7-2) 6-2 victory.

The 18-year-old, who also came from behind to trump Begu en route to her maiden Indian Wells crown last week, was down 5-1 and match point.

But Andreescu battled to her eighth successive win, with Sofia Kenin next up.

How did @BAndreescu_ create her own #MarchMadness at the @MiamiOpen?

Look no further to watch her epic comeback pic.twitter.com/vKdycMWKN7

Andreescu said: "The harder the battle, the sweeter the victory. I have gained a lot of experience from today, but hopefully I don't have to actually be down match point to win matches!"

Czech third seed Kvitova overcame Maria Sakkari 6-1 6-4 for a place in the third round.

Kvitova, who could rise to number one in the world by reaching the final in Miami, will take on 26th seed Donna Vekic for a spot in the last 16.

The 38-year-old Williams finished with 16 winners as she looks ahead to a clash against 24th seed Carla Suarez Navarro.

The elder sister of world number one Naomi Osaka, Mari, made her WTA main-draw singles debut on Thursday.

"It feels really good, like I can keep moving forward from here."

Finally healthy, Mari Osaka is ready to step out of her younger sister's shadow-->https://t.co/kzdi0FCvUNpic.twitter.com/wwSrC9DdOO

"I was super nervous, but I think I played well, despite that. I wasn't going to miss this tournament, you know. It was a good experience," Osaka said.

Keys, meanwhile, was shocked 6-4 4-6 6-4 by Australian veteran Samantha Stosur – who was joined by countrywoman Ashleigh Barty in the next round.