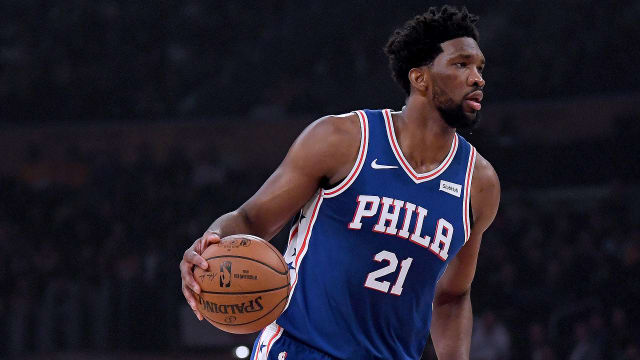 Joel Embiid inspired the Philadelphia 76ers to a come-from-behind 118-115 victory against the Boston Celtics.

Embiid tallied a game-high 37 points and 22 rebounds to help the 76ers overcome their NBA Eastern Conference rivals on Wednesday.

The 76ers trailed by as many as 15 points in the second quarter and headed into the locker room down 11 in Philadelphia midweek.

But, the 76ers rallied over the next 12 minutes and took the lead for good with less than a minute to play on an and-one by Ben Simmons.

Jimmy Butler added 22 points on seven-of-17 shooting for the 76ers, while Tobias Harris chipped in 21.

Kyrie Irving finished with 36 points for Boston in the losing effort but connected on just three of his 13 three-point attempts.

Philadelphia improved to 47-25 and sit third in the east. Meanwhile, Boston are fifth with a 43-29 record.

Westbrook, Harden's big nights not enough for Thunder and Rockets

Russell Westbrook tallied 42 points and 11 rebounds for the Oklahoma City Thunder, who succumbed to the Toronto Raptors 123-114 in overtime.

Houston Rockets star James Harden poured in 57 points, eight assists and seven rebounds but his team fell to the Memphis Grizzlies 126-125 in overtime.

Donovan Mitchell scored a game-high 30 points and added five assists in the Utah Jazz's 137-116 win over the New York Knicks.

Milwaukee Bucks forward D.J. Wilson came off the bench and missed eight of his nine shots against the Cleveland Cavaliers, who stunned the high flyers 107-102.

Julius Randle was one-of-nine shooting and scored six points in the New Orleans Pelicans' 119-96 loss to the Orlando Magic. He was minus-25 for the game.

Dwyane Wade beat the buzzer against the San Antonio Spurs as the Miami Heat won 110-105.

D-WADE FROM BEYOND HALFCOURT!#HeatCulture 100#GoSpursGo 95

Chandler Parsons off one leg!#GrindCity 58 #Rockets 46

The Indiana Pacers will look to rebound with a road win against the Golden State Warriors on Thursday. The Pacers have lost three in a row and five of their last seven, while the Warriors enter the matchup coming off a win over the Minnesota Timberwolves.