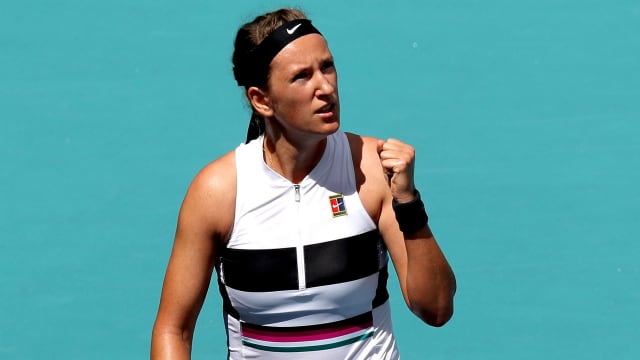 While there was play, unlike Tuesday, Indian Wells Open winner and Canadian sensation Bianca Andreescu was unable to hit a ball.

Teenager Andreescu, 18, had made it out on court to face Irina-Camelia Begu when the rain started and eventually washed out play.

Unfortunately, play at the @MiamiOpen has been cancelled due to pic.twitter.com/okf9ejwg0C

Alize Cornet, Shuai Zhang and Ajla Tomljanovic's matches were interrupted by the rain.

Azarenka has not won a singles title since the 2016 Miami Open, and survived a scare as she bids to win the event for a fourth time.

Azarenka, looking to go one step further than last year, when her semi-final run marked her best post-maternity result, said: "She's [Cibulkova] a very dangerous opponent, because no matter how many, she comes off confident or not confident against top players, she's always bringing a little bit of a next level and good game.

Azarenka and Cibulkova's duel was not the longest match of Wednesday, however, as Yulia Putintseva and Kirsten Flipkens played out an epic.

Putintseva lost the first set to the 2013 Wimbledon semi-finalist but staged a fightback to prevail after just over three hours.

The Kazakh appeared poised for defeat when she trailed 5-3 in the decider, only to win four successive games to progress 4-6 6-4 7-5.