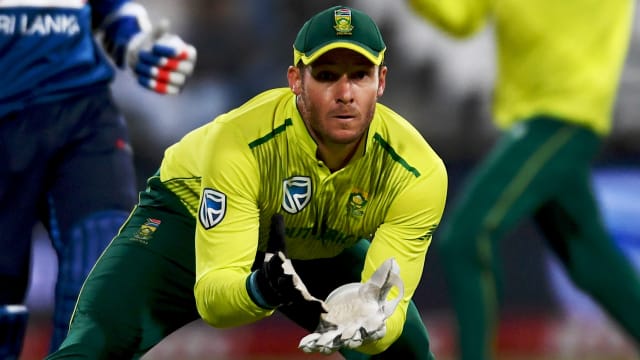 South Africa recovered from a late batting collapse to record a Super Over triumph at the end of a dramatic first match in their Twenty20 series against Sri Lanka.

Replying to the tourists' below-par total of 134-7 in Cape Town, the Proteas required 18 from the last four overs but ended up having to scramble a bye from the final delivery just to tie the scores.

David Miller and Rassie van der Dussen - who had shared a stand of 66 earlier in proceedings - managed to pick up 14 runs in South Africa's extra over, the former taking Lasith Malinga for a six and a four.

Leg-spinner Imran Tahir then conceded just five - two of which were wides – to secure victory for the hosts, who go 1-0 up with two games to play.

Wide ball and Tahir bowls a dot and immediately start celebrating but the next ball is ALSO A WIDE!!
In the end, South Africa win the match by 9 runs in the #SuperOver and go 1-0 up in the three-match series. #ProteaFire#SAvSLpic.twitter.com/lVbb1OMhde

Quinton de Kock kept wicket for the Super Over but it was Miller who had donned the gloves earlier in proceedings, a decision taken by South African team management with this year’s Cricket World Cup in mind.

The stand-in claimed a catch from his second delivery on the job and also completed a stumping as Sri Lanka laboured with the bat, despite Kamindu Mendis hitting three fours and two sixes in his 41 from 29 deliveries.

Thisara Perera (19) and Dhananjaya de Silva (14) made late contributions without putting too much pressure on the home bowlers, Andile Phehlukwayo the pick of the attack with 3-25.

Miller and Van der Dussen's fourth-wicket partnership, the duo making 41 and 34 respectively, put South Africa on course after a slow start yet both fell in the same over from Malinga, who ended with excellent figures of 2-11 from his four overs.

Isuru Udana held his nerve at the death, mixing up his pace superbly to leak just four runs, but wicketkeeper Niroshan Dickwella crucially missed a shy at the stumps to clinch victory off the last ball, allowing South Africa to draw level.

Miller then made the most of his second opportunity in the middle as South Africa eventually prevailed, meaning they can clinch the series at Centurion on Friday.