Bierhoff: Germany not in doomsday scenario 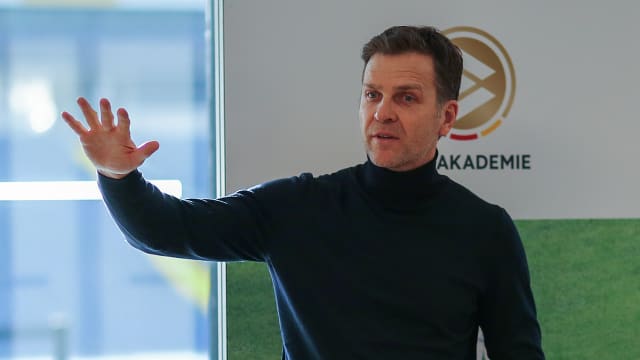 Oliver Bierhoff insists Germany are not in a "doomsday" scenario as a new era begins following the controversial omissions of Mats Hummels, Jerome Boateng and Thomas Muller.

The Bayern Munich trio, who all played a key role in Germany's World Cup triumph in 2014, have been left out by head coach Joachim Low for the start of the Euro 2020 qualifying campaign.

Team manager Bierhoff suggested after relegation in the Nations League last year Germany should keep faith with their experienced players, but there appears to have been a change of heart.

Muller reacted angrily to being dropped while Bayern complained at the timing of the announcement, made just days before their Champions League last-16 second leg at home to Liverpool, and former coach Jurgen Klinsmann criticised the decision.

The squad numbers for our upcoming games against Serbia and the Netherlands #DieMannschaft#GERSRB#NEDGERpic.twitter.com/orSiiKethC

Parallels have been drawn to 2004, when Germany invested in a new generation of talent after being knocked out in the group stage of the European Championship, but Bierhoff is unsure whether their current situation can be compared.

"Jurgen has a view from the outside in," Bierhoff told a news conference. "I do not want to set a doomsday scenario, we are in a better situation compared to 2004.

"There are fewer and fewer potential players in the U16, U17 area, but at the moment we still have a lot of good players we can develop. Other nations are better off, but we can look back on a good base, not as good as 2010, but we still have good players.

"I think the most important thing was that the players learned it [being dropped] from us, from Jogi Low. It was the right step to keep it short. This question of respect has surprised me, and for me as a player, the truth has always been the most important thing, and my impression is that after the first annoyance, some calm is restored."

Head coach Joachim #Löw won't join up with his team until this evening after undergoing emergency dental surgery. His assistants will take training later @SergeGnabry won't arrive until tomorrow because of a cold #DieMannschaftpic.twitter.com/1BFNLRZl6T

Bayer Leverkusen winger Julian Brandt conceded he did not expect Muller, Hummels and Boateng to be left out by Low but suggested they may return one day.

"I was surprised when I read about it, I do not know the national team without the three of them," he told reporters on Monday.

"We take the situation and we want to continue to be successful with the DFB, you never know what's going to happen in the middle of it all, you always see each other twice in your life.

"Of course we have a lot going on, the team is a bit younger now, and a lot of young players, including myself, want to be more responsible, and we need to do that over time.

"I have to find my own way, I do not worry, one says more on the pitch. Manuel Neuer and Toni Kroos are still there, they bring a little more experience."